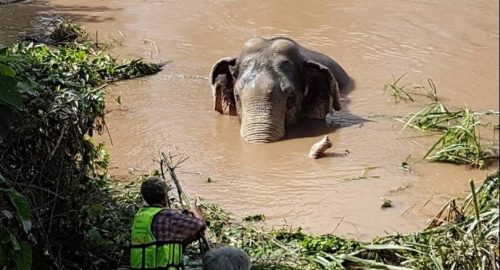 Local villagers tried hard on Tuesday to rescue a young wild elephant that had become stuck in mud in a canal after apparently being caught up in a flash flood in Phitsanulok’s Noen Maprang district.

The animal, believed to be a male, is thought to be from Thung Salang Luang National Park, where it may have become detached from its mother.

The young elephant, which was found almost totally submerged in Chompu Canal in the morning, was able to breathe by raising its trunk above the water.

By the afternoon, however, it appeared to be tired after being stuck in the muddy waterway for many hours.

Charnwit Sangsoi, chief of Tham Patapon animal protection zone, said the elephant may have been caught up in the flooding that was blanketing the area, and could have been rushed down the canal by the strong current.

Lieng Nuamoun, a 60-year-old former mahout, volunteered to try to get a rope on the animal in an attempt to get it out of the water.

However, the elephant seemed to respond angrily and used its trunk to beat the water, resulting in Lieng having to give up his attempt.

As of press time, the attempts to rescue the stranded pachyderm were still ongoing. Sadly, the story appears unlikely to have a happy outcome.