Warning Over Child Addiction To eSports In Thailand 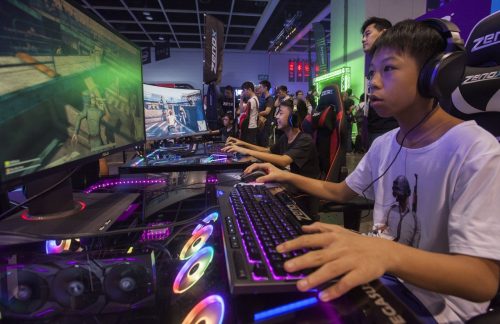 The following article affects anyone with children, be they Thai or farang. It raises some genuine concerns and should be taken seriously.

“We have already established a panel to raise this issue at the National Health Assembly forum later this year,” he said.

Yongyud hoped that relevant authorities, including political office holders, would review the Sports Authority of Thailand’s decision in 2017 to recognise eSports as a form of sport.

“We are worried that in the end more Thai children will become addicted to games,” Yongyud said.

He said most countries in the world had not treated online games as sports and pointed out that although eSports made a presence at the 2018 Asian Games, it was there just as a demonstration game.

A study in the United States revealed recently that just one in 1 million online-gamers could become a professional in the field, he said. “Dozens of thousands, meanwhile, have become game addicts,” he said.

In Thailand, the Institute of Child and Adolescent Mental Health reported that as many as 60 children had sought treatments for game addiction in recent months.

“The number of game addicts has risen by one-fold since eSports has become recognised as a form of sport,” Yongyud said.

He said his concern was shared by people working for the protection of children.

Some entrepreneurs promoted eSports by claiming that players’ skills could build a future career, and some even offered to host eSports competitions for schools.

Teerarat Pantawee, who heads the National Health Assembly’s panel on children and media, told a recent forum that eSports had grown in popularity partly because there were many official eSports contests and promotions.

“Thailand’s eSports industry is now worth more than Bt10 billion. It has also been growing at the rate of 12 per cent per annum,” she said.

According to the 2018 DQ Impact Report, which examines the “precarious status of children’s exposure to cyber-risks worldwide”, Thai children spend 35 hours a week online. Of all children using the Internet in Thailand, more than 50 per cent go online to play games.

Teerarat said many children were now negotiating for more online game-playing time by arguing with their parents that their games are a sport.

“Children’s excessive exposure to such media is not good for developing their intellectual and emotional quotients,” Teerarat emphasised.

Times comment:- There are more than mental issues to consider. As a former physical education teacher in the UK, I witnessed a large decline in the general fitness and physical development of children. As physical education time in schools declined due to lack of funds and teacher expertise, children were deprived of the exercise they needed.

Add to that the increase in health and safety issues which prevented children from taking part in many traditional activities at “playtime” and you have a generation of children who are not getting the exercise their bodies need to develop properly.

Anything which takes the place of physical activity is a danger and should not be promoted in schools. Children of all ages spend more than enough time playing with pc’s and phones.