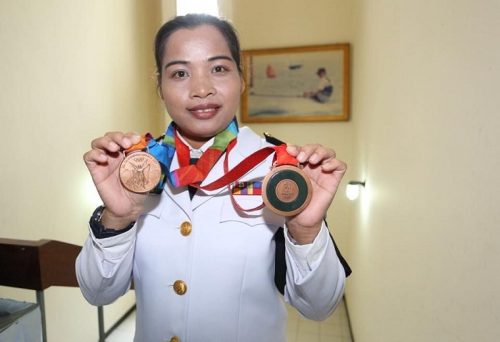 Weightlifter Wandee Kameaim became the first Thai to win back-to-back Olympic medals after she was awarded a bronze medal from the 2008 Games following a disqualification of a Russian who failed in an anti-doping test.

The Olympic Committee of Thailand on Wednesday presented a bronze medal from the women’s 58g category to the 39-year-old Thai who also won the bronze from the 2004 Olympics in Athens.

Wandee, now a lieutenant, initially finished fourth in the Beijing meet. But Russian Marina Shainova was stripped by the International Olympic Committee of her silver medal after she was found to have used prohibited substances called stanozolol and turinabol (announced in 2016).

North Korean O Jong-ae, who was placed third, was therefore promoted to second place with Wandee to third.

Thailand has two athletes who won medals in two straight Olympics. The other was Pimsiri Sirikaew whon won silvers in the women’s 58kg weightlifting in 2012 and 2016.

She will receive more than BT4 Million incentive money from the government.

Good news for Wandee and Thailand but why has it taken so long to sort out? Unbelievable !