Welcome To The World ! Thailand And Buriram Ready To Stage Historic MotoGP 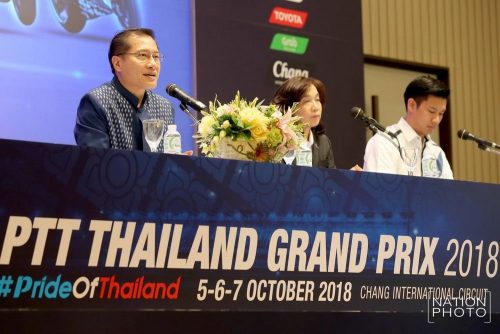 Minister of Tourism and Sports, Weerasak Kowsurat is upbeat about the state of preparations for Thailand’s first ever MotoGP event next month.
The inaugural event, at the Chang International Circuit between October 5-7, will be the first in a three-year deal between the Sports Authority of Thailand and Dorna Sports, at an annual cost of Bt100 million.

SAT, on behalf of Ministry of Tourism and Sports, and in collaboration with Buriram Provincial Government Office and main sponsor PTT, yesterday held its final pre-race media conference and announced their readiness to stage the historic event.

“This is a monumental leap forward for Thailand and demonstrates our capacity to host a world-class sporting event which will be broadcast to more than 800 million viewers worldwide,” Weerasak said.

“Thailand is now fully prepared to accommodate hundreds of thousands of racers, motorsport fans, and local and foreign visitors flocking to Thailand and Buriram province,” added the minister, who predicted that the Grand Prix would generate Bt1 billion revenue to the Kingdom and attract more than 100,000 people to Buriram.

In terms of the venue, Tanaisiri Chanvitayarom, managing director of the Buriram United International Circuit, said the track and its facilities had been renovated to ensure a successful organisation.

“We are currently working very hard to ensure everything is in top condition and we will definitely be ready to welcome everyone by race week. We have been expanding our stands so spectators can catch the action from every vantage point,” he said.

Parking areas have been expanded around Buriram’s Muang district to maximise convenience for visitors. There are free shuttle buses to the circuit, while 26 parking areas for cars and motorcycle inside and outside the circuit’s compound will be able to accommodate more than 10,000 vehicles.

Tanaisiri also added that the media centre had been modified to facilitate journalists from around the world while additional media pavilions had been created to provide support for Thai journalists.

Apart from the race, there will also be other activities and entertainment, including a Muay Thai Expo and bouts featuring legendary Muay Thai boxers such as Samart Payakaroon and Somluck Kamsing on October 5.

On the evening of Saturday, October 6, motorsport fans can switch gears and enjoy performances at a Chang Music Connection concert, which will feature top Thai acts such as Waan Thanakrit, Atom Chanakant and Getsunova.

The grand weekend will end with a bang as girl group BNK48 will perform a mini-concert on Sunday, October 7.