What To Do About Tourists Who Break The Traffic Rules While Renting Vehicles In Thailand? 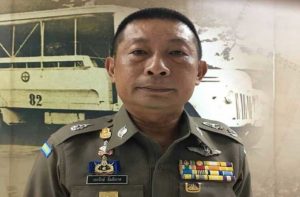 What to do about tourists who break the traffic rules while renting vehicles in Thailand?

The cop at the centre of reforming old traffic laws and implementing a points system has raised the issue of what to do about foreign tourists who rent vehicles and break the law while in Thailand.

Maj-Gen Ekkaluk Limsangkat has asked representatives from the Royal Thai Police and the Department of Land Transport to recommend proposals so that foreigners can be dealt with appropriately and not just do as they please on the Thai roads.

Maj-Gen Ekkaluk said that negotiations with the National Legislative Assembly and other agencies had been ongoing in regards to reforming 1979 laws.

Such laws allowed such practices as confiscating licences for fine payment at police stations. These are being replaced with an online penalty points system that will see fines issued and paid differently to the past.

He said that outline approval for the points system was granted on February 14th. Now just a few more legal hurdles need to be overcome.

He hoped that within six months the new points system would be functioning.

Along with what to do about foreigners breaking the traffic rules in rented vehicles.