Why Motorcyclists Should Not Stop Right In Front Of Large Trucks 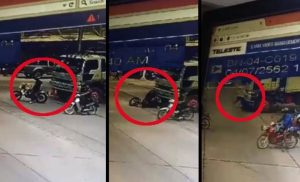 Why motorcyclists should not stop right in front of large trucks

CCTV footage from Nakorn Nayok showed a truck trailer drive over a motorcyclist at a red light and propel him under the wheels for several meters.

Daily News reported that the trucker was unable to see the biker who had stopped out of his sight.

The footage appeared on the page of the Ban Na police in the city north of Bangkok.

Chief of the Ban Na constabulary Pol Col Kasin Thamrongsrisuk said the incident happened on Sunday at the intersection leading to Wiharn Daeng district of Saraburi.

The motorcyclist was only slightly hurt.

The truck driver agreed to pay for all bills. It was accepted that the biker could not be seen.

Pol Col Kasin warned bikers not to stop at the lights in front of trucks and to give them space.