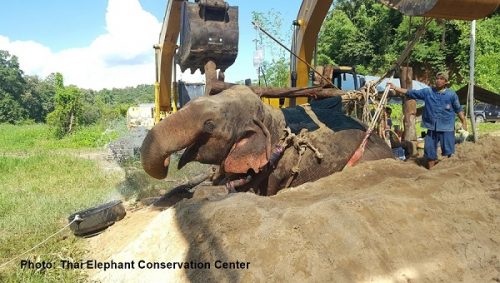 The wild male elephant which was rescued from Khlong Chompoo in the Thung Salaeng Luang National Park in Phitsanulok’s Noen Maprang district and brought to the elephant hospital in Lampang for treatment has died, wildlife officials have confirmed.

The elephant, which has been named “Chompoo”, was swept away by flash flood and fell into Khlong Chompoo, a stream in the national park, on Oct 17. He got stuck in the stream for over 26 hours before being rescued on Oct 18. He was then transported to the elephant hospital in Lampang on Oct 19.

On arriving at the hospital, Chompoo was weak, unable to stand or walk as the hind legs had sustained injuries.

Yesterday (Oct 21), a team of veterinarians used a crane to lift up the elephant to perform an enema for an examination.  The elephant tried to stand on its own feet, showing a sign of improvement.  A massage was performed on its hips and hind legs to increase the blood circulation.

Taweechok Angkhawanich, the veterinarian, said Chompoo was bleeding in the spine. It was given antibiotics, water and food solutions. The elephant has been given 200 litres of saline solution per day as it eats only a little food but does not drink water.

He said it was still not known if it would have a problem with its bones.

However, in late afternoon, the elephant’s condition deteriorated and it succumbed to its injuries. The jumbo died three days after he was pulled out from the stream.

A senior official at the National Parks, Wildlife, and Plant Conservation Department said the veterinarians would conduct an autopsy to find out the cause of the death.