Will13 Year-Old Mint Be Deported Back To Thailand ? 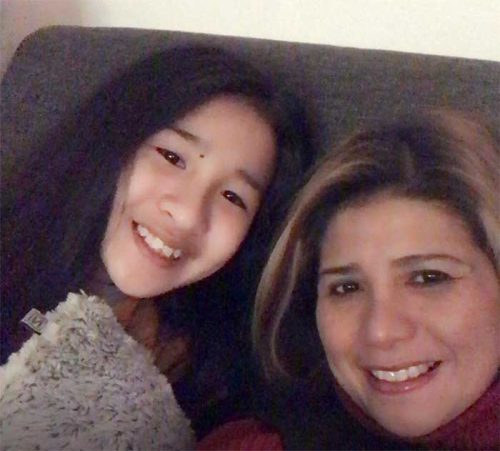 Mint with her Mum.

In Denmark, this is hardly news anymore, – just another foreigner about to be deported. And you may think “but this is a child living with her mother in Denmark – Danish media must be outraged!” Again no. We have seen several of these cases over the last couple of years, and the more cases that appear the less the media cover them. And you might wonder how many cases are not covered at all.

This time a thirteen-year-old girl, Mint, was supposed to be deported back to Thailand on Friday the 9th of March, but just the day before the family got good news:

Mint can stay in Denmark. But only while her case is being processed.

Mint stays with her mother, who is married to a Danish man. The mother also has custody of Mint.

“It is crazy. We are extremely happy,” says the stepfather, Frank Jørgensen, to DAGBLADET Køge.

“When all hell has broken loose, you realize there are so many good people surrounding you. We are happy and grateful for the support.”

At first, Danish Immigration Service declined to issue a residence permit to Mint. The reason: Mint would not be able to integrate in Denmark.

Now Mint’s school has to give a statement, which the Immigration Service will include in their assessment of the case. At Hastrupskolen, the school Mint attends, the principal does not understand why Mint should not be able to integrate.

“The very thought that Mint should not be able to integrate into the Danish society can hardly be more wrong. Mint is an amazing girl, sweet and clever. She is about to attend a normal, Danish school class.

She is smart and there is no doubt that she will be able to take the final tests in three years. Afterwards she can get an education. She is a nice, skilled and wonderful girl, who both classmates and school appreciate,” tells the principal Thomas Kielgast, who is also a representative of the political party SF in Køge City Council.

Thomas Kielgast finds support from two of his colleges at the council, both from the political party Venstre. They have now contacted their party colleague, Inger Støjberg, Danish Minister for Integration. They call the case grotesque and want the minister to look into it. This, however, the minister rejects.

“I can easily understand that you get affected when you read about cases like this, but I think it is important that we respect, that these cases need to be treated independently, and that we as politicians should not take time out to make a decision in each individual case. That, I think, would be unsustainable in terms of legal certainty for the individual,” says Inger Støjberg to DAGBLADET Køge.

It might take seven months for Mint’s case to be tried. The family has discussed moving to Thailand if Mint does not get a residence permit.

“It cannot be right, that I need to flee from my own country to keep my family together,” says Frank Jørgensen.

Mint’s story has so far been covered by the local medias in her home town, Køge, and recently by ekstrabladet.dk.

Times comment:- As stated earlier in the story, there will be hundreds of similar cases occurring in many countries and they are becoming less and less newsworthy which is bad news for the individuals concerned. However, when you are dealing with people it is impossible to draw up a set of “rules” because everyone is different.

Hopefully, authorities will take this into consideration when dealing with each individual case. It is even more poignant when you consider Europe is allowing thousands of illegal immigrants to stay yet someone like Mint may be deported.