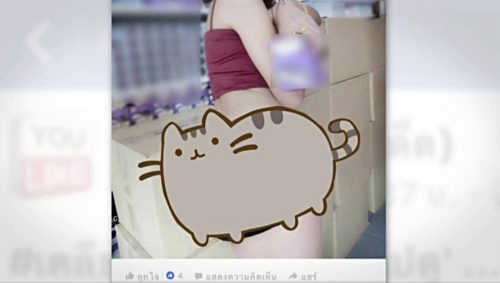 The “offending” buttock blocked out.

The Food and Drug Administration (FDA) will take legal actions against a woman who posted her image in her Facebook page baring her buttock to show off the effects of her skin whitening products.

Commenting on the image which has provoked widespread criticism among netizens, FDA deputy secretary-general Somchai Preechathaveekid clarified that the product shown in the controversial image Clear Dark body lotion was registered as a skin cosmetic containing whitening substance which may whiten the colour of the skin.

However, he said that the advertisement might cause misunderstanding and might encourage legal or moral violations which might lead to cultural degradation in defiance of Cosmetics Act B.E. 2558 which carries one-year jailterm and/or a fine of 100,000 baht.

The woman in question, Ms Nitthakarn Nanthasutheepat, has been summoned for questioning by the Consumer Protection Police Division. Samples of the whitening product were also sent to the FDA for analysis.

After meeting with the police, Ms Nitthakarn said she had no intention to be sexually provocative for baring her buttock as she intended only to show the efficacy of her product.

When will people ever learn here? What did she expect ? This was always going to happen and she deserves no sympathy whatsoever.