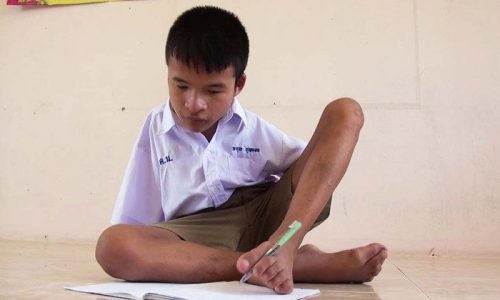 Karun an inspiration to others. (Photo:-Sanook)

Thai media have reported on a 12 year old who is showing his able bodied classmates the meaning of perseverance. He is proving to be an inspiration to other handicapped children.

Karun Bunphaen was born without both arms but he is not letting his disability hold him back at all.

He is immensely popular with teachers and students alike at Ban Dong Noi school in Mahasarakham in Thailand’s north east.

He studies everything that all the others do using either foot to complete his many written assignments.

Now in M2 (year nine in the British system) he hopes to go to university when he has finished school. He still dreams of being a soldier though he accepts that may be beyond even his capabilities.

Karun lives with his family and one of his teachers, Duangsuda Talasorn said that he is growing ever more independent.

She said he is a special kid who shows great perseverance and never gives up in his quest to improve himself and have a happy life.

Getting grades that place him in the middle of most classes Duangsuda said that he was very successful, happy and popular with everyone at the school.

Now and again we come across stories that come as a timely reminder to all of us that we have much to be thankful for. This young man is a shining example of what can be achieved with sheer determination rather than just sitting back and feeling sorry for yourself.