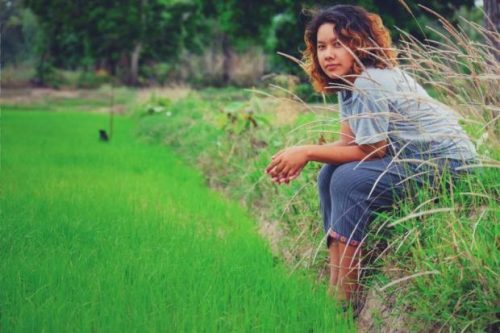 Nalinpaht, making use of social media.

The rice price crisis may be a major problem for most rice growers, but not for a group of young farmers who know how to exploit sales through social media.

For Pongpat Sukarbjai, the key to selling crops is in reducing the use of pesticides and chemical fertilisers. The 29 year-old master’s degree student at the Faculty of Economics at Kasetsart University manages 100 rai of paddy fields in the Bang Len district of Nakhon Pathom.

Reduced use of chemicals is making up for the modest productivity of the farm because some customers prefer organic produce.

Previously, all the rice he harvested went to the mill. However, he later turned to social media as a channel for marketing and selling his rice berry, at a healthy 100 baht per kg, and his rice was well-received.

Pongpat has sold the rice both online and to the mill.

He fees the mill is still an important place to sell rice, but the online channel provides an alternative point of sale. It allows the selling of other farm products as well.

His farm has been designed to be an integrated one where fruits are grown and fish and chickens are raised, to lessen his reliance on a single crop. This method helps control the supply of rice going to the market, which keeps the rice prices high.

Nalinpaht Puttijarungvong, a 34-year-old farmer with a bachelor’s degree from Bangkok University and who owns 21 rai of paddy fields in Prasat district in Surin, said she has obtained contracts to sell 10 tonnes of her Hom Mali and rice berry with 20 customers through online sales.

The online outlet has cut her dependence on rice mills, which bought her rice at low prices. Her success rests with how to control rice quality and create trust among her customers.

She believes that farmers should use less fertiliser and chemicals, which would reduce production costs by more than half.

Selling rice on social media has increased recently after many young farmers decided to reach out directly to consumers to avoid the middlemen.

An Economics faculty lecturer at Kasetsart University, said the low price of rice is being caused by  large volumes going on the market while world demand for consumption is decreasing.

Sadly, all this will not help the thousands of ordinary farmers who do not possess the knowledge or the finance to take this road.

Cutting down on fertilisers would help as they are so expensive, not just here but all over the world. For those with enough land crop rotation and diversification would also help.

However, the immediate future does not look bright for the much-put-upon Thai farmers.

(Since publishing this, the government has agreed to provide assistance to the farmers. See article on November 2)