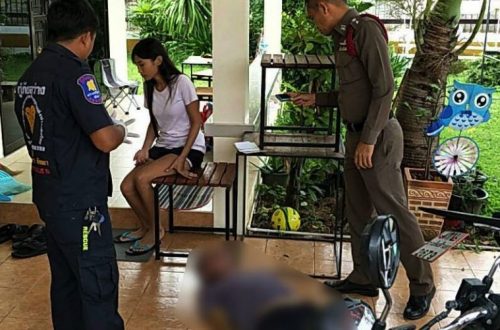 A young Thai woman and her French husband had lived together for the last two years near Pattaya.

But there had been lots of arguments between the pair recently and on Tuesday night they decided to split up.

She slept in the bed and he slept on the sofa by the TV in the hall of the house.

In the morning he was gone – she imagined he had left as they had agreed the night before.

She didn’t bother calling him – it was over.

In the afternoon Natthanat Surarat, 23, had some business to attend to and she decided to go out.

She opened the door and saw her husband hanging from the eaves of the house by a nylon cord. She called the police.

There were no signs of a struggle or things missing from the house.

Daily News reported that Natthanat was in tears as she kissed her husband on the forehead in a final farewell as the body was taken away for autopsy.

Police said it was a clear cut case of suicide brought on by the stress of the break-up of the couple.

The embassy and relatives have been informed.