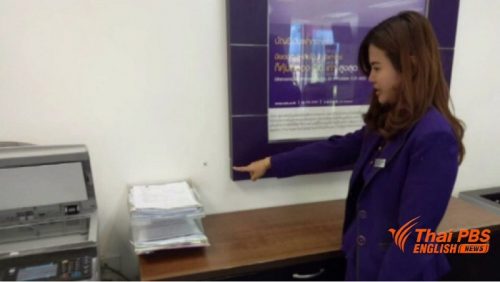 Bullet hole from the gunshot.

A female bank employee and a client were injured by a gunshot which was accidentally fired from a pistol of a police officer at the Siam Commercial Bank’s Ban Chang branch in Royong province on Monday morning (Dec 18), police said.

Pol Col Jakrin Thuasupap, the Ban Chang police chief, said the accident occurred when Pol Sub-Lt Nikom Pan-iam, a police officer of Ban Chang police station providing security inside the bank, went into the toilet and took off a belt with a 9mm Glock pistol in the holster from his waist.

The pistol accidentally dropped onto a table and a gunshot was accidentally fired from it. The bullet went through the toilet wall, hitting Ms Chanetthip Phusuwan, a bank employee, in a shoulder. The gunshot went on to hit Nares Nuansri, a client who was sitting in front of the bank counter, in the belly.

The two were admitted to Ban Chang Hospital. They were later declared out of danger.

The accident was likely to have been caused by recklessness on the part of Pol Sub-Lt Nikom, who had been interrogated. However, he had not yet been charged, Pol Col Jakrin said.

Certainly, a narrow escape for the two civilians. Whether charges should be brought is open to debate. Certainly, the officer should’ve taken more care but it was a freak accident due probably to call of nature. Thankfully, the incident had a happy outcome.