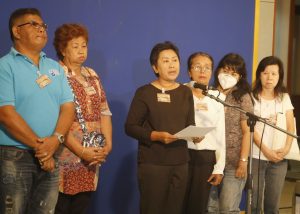 The civil sector is calling on the National Legislative Assembly (NLA) to stop the “mass production” of new laws as Thailand heads for its first election in five years, and pass the job on to the new elected government. 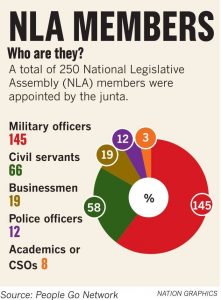 The People Go Network yesterday handed a petition signed by 280 individuals and organisations to the NLA, asking it to halt its passing of laws on an “industrial scale” under the military-led National Council for Peace and Order (NCPO).

The group also said the NLA was a rubber-stamp parliament, comprising representatives of the authorities and military, which passes laws that only benefit the state and big corporations, instead of the public.

The NLA is scheduled to stop working on March 15.

Meanwhile, the People’s Movement for a Just Society (P-Move) will gather outside Government House today to protest against the NLA’s passing of laws that it says are harmful to the public, environment and human rights such as the new Factory Act, the National Park Act, Rice Act and Cyber Security Act.

People Go Network coordinator Supaporn Malailoy said that even though the date for the election has been set, the NLA continues to hurriedly push through new laws when it should be halting its legislative duties.

She said that this was against the law-making procedure and excluded the public from being involved in legislation.

“Even though the NLA allows people to comment on new laws on its website, we have noticed that there are many controversial laws that have been passed despite strong public opposition.

“Hence, it is clear that this online public hearing is just a ritual and the NLA doesn’t really listen to people’s opinions,” she said.

According to the Internet Law Reform Dialogue (iLaw), over the five years of the NCPO-led government, the NLA has considered at least 509 laws and passed 412 of them. So, essentially, the NLA has approved new laws at a surprising speed of around 100 per year.

The People Go Network pointed out that the NLA has passed 66 laws within a month – from January 18 to February 18.

Nutchapakorn Nummueng, the iLaw coordinator, said this military-led government’s extraordinary speed at passing laws compared to that of democratic governments only proves that the NLA is nothing more than a law-making factory.

Supaporn said this rush in legislation is abnormal and will be unlawful if the NLA insists on passing laws until seven days before the election. She added that the operation of the NLA was unjust, as it was only working to ensure the highest benefits for big corporations and diminishing people’s rights.