Asia’s Most Popular Destinations For Tourists 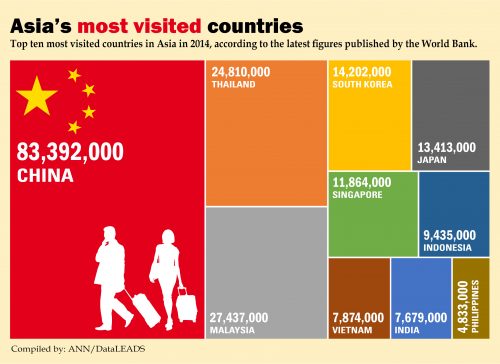 Most popular tourist destinations in Asia.

China is the top tourist destination in Asia, according to figures released by the World Bank.3 million tourists visited China in 2014 making it first among the ten most visited countries in Asia. Since 2008 Olympics in Beijing, tourism has been a national priority in China. It is promoting tourism as a major industry which is vital for economic development.

The World Bank has ranked Malaysia as the second most visited country . In 2014, 27 million 27,437,000 tourists visited the Malaysia which is famous for offering tourists a wide variety of attractions.

Thailand is ranked third in the list with 24 million tourists visiting the country in 2014. At present, according to the Tourism Authority of Thailand, 22.4 million international tourists visited the country between January to August 2016, generating around 31.2 billion US dollars.

(Thanks to the Nation Thailand)