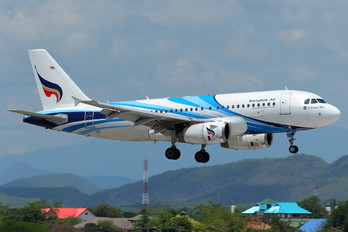 “Bangkok Airways is interested in other continents such as Europe, the Americas and Africa, especially countries in South America that are projected to have high spending power,” the vice president for sales, said yesterday.

“This trend has encouraged us to appoint a sales representative in Brazil. We are also looking to appoint more representatives in various countries such as Mexico, Kazakhstan and Uzbekistan.”

He said the airline would also seek to consolidate its strengths in short-haul markets, especially Cambodia, Laos, Myanmar and Vietnam (CLMV), on expectations of stronger economic growth and high travel demand. Moreover, these countries are also popular destinations for European and American travellers.

Bangkok Airways operates more than 40 flights to the four CLMV countries and plans to add services to some routes and open new ones to meet growing demand.

The airline is also considering further expansion in the Chinese market. It already operates daily non-stop flights linking Koh Samui with Chengdu and Guangzhou. It plans to launch non-stop service connecting the resort island with Chongqing in the near future.

Backing these efforts to broaden its presence in the key market, the airline will participate in trade shows in China.

The Bangkok Airways president said that the airline aimed to expand its network to cover the most important destinations across Asia and better serve passengers and build up linkages with code-share partners.

He went on to say,“We will further utilise our strategic flying hubs, which are Bangkok (Suvarnabhumi), Samui and Chiang Mai, by offering new non-stop services from these airports to some high-potential destinations in Asia, such as Chiang Mai-Vientiane, Chiang Mai-Bagan in Myanmar, and … Bangkok-Nakhon Ratchasima and Bangkok-Phu Quoc, Vietnam.”

“These routes are still being approved by the local authorities.”

The carrier plans to increase the number of code-share partners from the 22 airlines at present. Its newest partner is Xiamen Airlines. This year Bangkok Airways expects to sign agreements with a further four Asian carriers.

“As for aircraft delivery plans, we are expecting to receive five aircraft, comprising two ATR72-600s and three Airbus A319s. This will bring the total number to 39 aircraft for 2017,” the president stated.

This year Bangkok Airways also plans to invest more in airport-related businesses in order to enhance the company’s overall performance by building new hangars at Suvarnabhumi and Sukhothai airports, the company said, noting that the new facilities will improve maintenance systems.

The company is also looking at developing and building two new airports. However, such plans have to undergo a lot of processes and be approved by the relevant authorities.

The airline said it would expand its Bangkok Air Catering business by opening two more facilities, at Phuket and Chiang Mai international airports. The Phuket project is expected to open in the third quarter of this year, with the Chiang Mai facility likely to open in 2018.

“Last year, the airline carried 5.6 million passengers, up 9.5 per cent from the previous year,” Prote said.

“The number of passenger is expected to grow 12-13 per cent this year because of more routes opening up and more frequencies added to existing routes.”

It will be interesting to see if these developments will benefit the ex-pat community with another Thai airline providing flights to Europe and the USA, thus increasing competition for passengers.