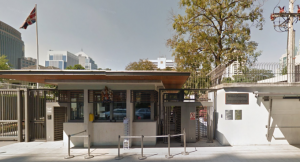 A man contacted the British Embassy in Bangkok to complain about a massage that he felt he shouldn’t have to pay for.

The man requested that staff at the embassy speak to the massage parlour on his behalf after he said he fell asleep during the massage and therefore shouldn’t have to pay.

The British man complaining about his massage in Bangkok made the top ten list of odd requests received by British consular services in 2018, according to the Foreign and Commonwealth Office.

Other strange requests made to British embassies and consulates around the world included a caller in the USA wanting to know who had just been voted off Strictly Come Dancing.

A man asking if there were vampires in Poland after a woman he had just met online asked him his blood type, while a man in New Delhi wanted to know what time the British High Commission opened as he heard it sold vegetarian sausages.

And spare a thought for the British man in the Canary Island who requested Foreign Office assistance after he claimed a stray cat had ‘broken into his room’ and urinated on his bed.

Speaking to The Independent, a Foreign Office spokesperson said:

“I can regretfully confirm that the Foreign Office isn’t able to offer advice on vampires, rogue stray cats or Strictly contestants. And our capacity to deploy veggie sausages remains sadly lacking.

“But in all seriousness, getting into trouble abroad can be daunting and upsetting. If you find yourself in an emergency in another country, contact the nearest British Embassy, High Commission or Consulate and our consular staff will do everything they can to help.”

If you are British national and require assistance, the embassy can help you with the following:

It can not lend you money, get you out of jail if you have broken the law or help you negotiate to pay for a massage!