British Man And Thai Wife Fight Off Mugger In Pattaya 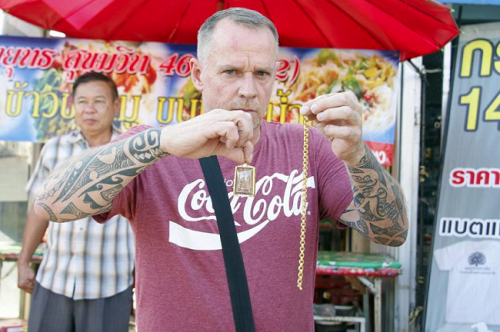 A British man and his wife fought off a mugger in broad daylight in Pattaya.

The incident happened around 4pm on Friday in the Nong Prue area when the man, identified by Thai media as Mr Nigel Connolly , 47,  was shopping with his wife on Pattaya 3rd road.

As the couple walked down a side soi they were approached by a man who tried to steal Mr Connolly’s gold chain, believed to be worth in excess of 100,000 baht.

A scuffle ensued as Mr Connolly and his wife tried to fight off the mugger, who managed to wrestle free and flee to a waiting motorcycle.

During the altercation Mr Connolly’s gold chain snapped in two and the mugger managed to escape with one half.

Mr Connolly’s wife reportedly gave chase but turned back when she saw the mugger’s accomplice waiting on a motorcycle.

Police warned of a spate of similar robberies in the Bang Lamung area in recent weeks.

At 1am on Friday morning, a Korean tourist, who had just arrived in Pattaya hours earlier, had his gold necklace worth 180,000 baht snatched from around his neck by a man on a motorcycle outside the BanKaew resort in Wong Amat.

Police are investigating both incidents.