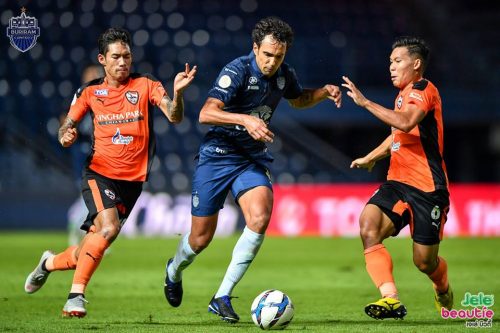 Buriram had to dig deep to overcome a determined if somewhat over-physical Chiang Rai side. They had to get over the disappointment of a first minute penalty being overturned by VAR (we’ll discuss that later) and they also had to keep their heads and not get involved in a war of attrition.

The visitors are a hard side to beat and give little away, apart from numerous free-kicks. When they actually concentrated on playing football, they were dangerous on the break and hit the post in the second-half. However, Buriram deserved to win this game which was always a potential banana-skin.

They had the majority of possession, with Diogo a constant threat. The problem is, Buriram are predictable and make it easy for sides to get men behind the ball. They are always looking to get the ball wide which is commendable but so often they check and go backwards instead of trying to get behind defences.

The main culprit is Korrakot who appears to totally lack conviction both in attack and defence which can put his side under unnecessary pressure. 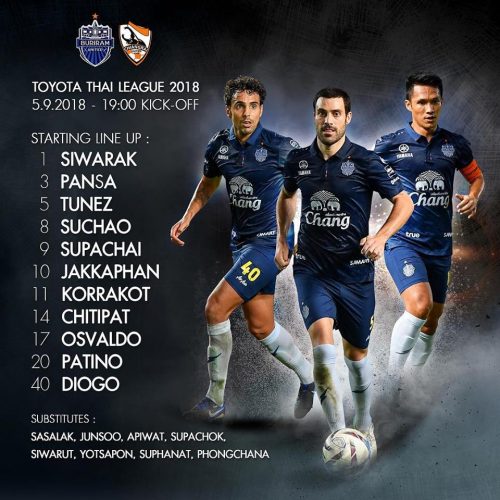 Buriram started with Osvaldo, Patino and Diogo which has been tried before with disappointing results. This game was no different. It doesn’t work. Patino needs to be deployed as a lone central striker, with Diogo given a free rein. Osvaldo and Korrakot are often occupying the same territory meaning that one of them is redundant.

The match had a dramatic opening when Diogo’s backheel sent Suchao racing into the right-side of the area. He was sent tumbling and the referee immediately pointed to the spot. Furious protests from Chiang Rai convinced the referee to consult the VAR and after a lengthy delay he said no penalty.

After watching the replay several times, (as did the referee) I find that puzzling. Certainly, Suchao was not tripped but he was pushed and his momentum took him down. If the referee considered that not to be a foul, then Suchao should have been booked for diving. The term “minimal contact” is often used. There is nothing in the rules which mentions how much contact is made. It’s either a foul or it isn’t. It was a penalty.

Siwarak was called into action in the 5th minute getting down well to his left to hold a low shot. Buriram then enjoyed a long period of possession without creating any real danger.

It was the visitors who threatened again in the 21st minute when a swift break down the left saw the ball flash across the home goal with no attacker able to get the touch which would certainly have opened the scoring.

A Buriram attack down the left in the 32nd minute saw skipper Victor slice an attempted clearance into the air but it looped into a grateful keeper’s arms. Seven minutes later Korrakot set Patino away down the left but his low cross was just behind the inrushing Diogo.

Another left-wing cross in the 42nd minute saw Diogo get in a diving header which was comfortably held by the keeper. Right on half-time Suchao brought down the eccentric Bill just outside the area but the striker’s free-kick flew high and wide.

A big cheer greeted the return of Sasalak at the start of the second-half when he came on for Suchao. Buriram started the half on the front foot but a flurry of corners and free-kicks came to nothing. Patino was replaced by Junsoo in the 64th minute and it was difficult not to feel sorry for the big striker as he had seemed unsure what his actual role was.

Two minutes later Buriram had a big let off when a quick Chiang Rai break away down the left saw the ball strike the post with Siwarak a mere spectator. The deadlock was finally broken in the 77th minute when Osvaldo ran at the visitors’ defence down the right before some delightful close control allowed him to slide a low cross into the path of Diogo and the finish was a formality. 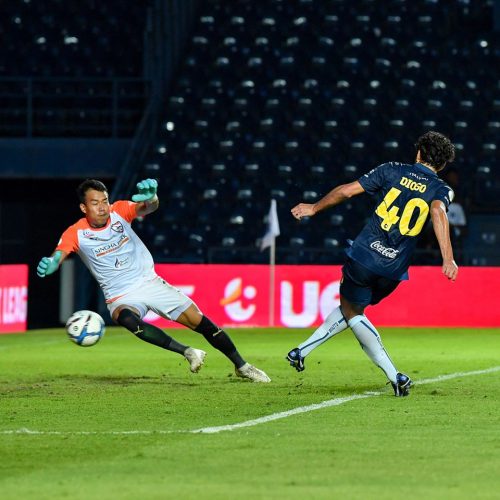 Diogo fires in the winner

The expected intense response from Chiang Rai never materialised as the fresh legs of Junsoo harried and chased them in their own half and they were simply not allowed to mount meaningful attacks.

With two minutes remaining Supachok came on for Osvaldo and in stoppage time Diogo set up the unmarked Sasalak in the right of the area but he curled his shot wide.

So a welcome and deserved three points . Chiang Rai as always put themselves about, particularly their oddly-behaved striker Bill who seemed determined to set a new record of fouls conceded in a match. Being serious, he was very fortunate to remain on the pitch.

Next up is another difficult game, Nakhon Ratchasima away, on Saturday September 8, kick-off 7pm. They have a solid defence and will be difficult to break down.