Buriram’s last home game of the season saw them overcome a game Pattaya side in a match that was much closer than the 3-0 scoreline suggests. Both teams found the humid conditions energy sapping and the football was played at a sedate pace with keeping possession the order of the day.

A superb strike by Sasalak lit up the celebratory occasion as Buriram maintained their 12 point lead at the top. Pattaya were prepared to get men forward and went close on a number of occasions but ultimately it was always going to be Buriram’s night. 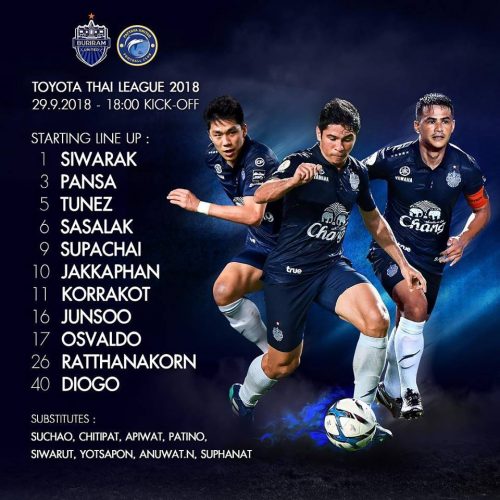 There was a large crowd present, due mainly to the club’s generous offer of 20bht admission for schoolchildren.

The game was uneventful for the first twenty minutes with Buriram content to play patient, possession football. However, that changed in the 23rd minute with a stunning strike by Sasalak. He latched onto Diogo’s clever back-heel before advancing and hitting a superb left-foot shot from almost thirty yards past a helpless keeper .

The game then reverted back to keeping possession with Buriram looking the more likely to extend their lead. Korrakot found Diogo with a good cross in the 36th minute but the Brazilian just couldn’t get the ball under control and the chance was gone. Two minutes later Diogo tested the keeper with a free-kick but it was fisted away.

Osvaldo was next to threaten in the 40th minute when he burst into the box from the right but his shot was blocked. Little had been seen of the Pattaya attack but a fierce long range drive in the 41st minute was just too high though Siwarak had it covered.

Jakkaphan picked up a yellow card in the 44th minute after a needless challenge in midfield.

Buriram almost got the chance to increase their lead in the 46th minute when Diogo’s pace and persistence had the keeper in trouble but the two players ended up in a tangle and the ball was cleared. Two minutes later Pattaya had their first real sight of goal when a header from a left-wing cross was just too close to Siwarak.

Osvaldo then curled a left-wing free-kick towards the far-post in the 50th minute but the angle was just too tight for the inrushing Tunez. The same player was in action again ten minutes later when he sent in a fierce right-foot shot from thirty yards which was inches too high.

Buriram created another good opening in the 62nd minute when Osvaldo played Korrakot in down the left but he failed to look up and sent a weak low cross straight to two Pattaya defenders. Buriram then brought on Anuwat for Supachai which was surprising as the youngster had been doing well. Ratthanakorn was the obvious choice as he contributed little the whole game.

Diogo was next to try his luck from long range but again the ball flew inches too high. Back came Buriram in the 68th minute and Diogo found Korrakot wide left and he sent over an excellent cross which the unmarked Jakkaphan turned well-wide of the target.

The second substitution saw Patino come on for Osvaldo in the 71st minute and what an inspired move it was. Jakkaphan sent a right-wing free-kick to the far-post for Pansa to get in a downward header. The keeper managed to block it on the line and Tunez was first to react only to be taken out by a wild challenge. The ball broke for Patino to turn into the net from close range.

Tunez had fallen heavily on his right shoulder and had to receive lengthy treatment before continuing. It should have been three in the 75th minute when Diogo found Patino free in the box with a sublimely timed cross from the right but the big striker snatched at the chance and sliced wide.

Tunez was obviously in some discomfort and had to be replaced by Suchao in the 77th minute. Sasalak moved to right back with Pansa moving into the centre.

Sasalak received a yellow card in the 85th minute following a rash challenge before Buriram wrapped things up in the 90th minute. Korrakot sent a ball over the top for Diogo to collect and as he turned his marker, he was brought down for a clear penalty. This time, there was no mistake as the keeper was sent the wrong way.

So a satisfactory night for players and fans alike. It wasn’t a thriller but Buriram got the job done.

Looking ahead to next year, one player who did impress me was Pattaya’s number 8 Peeradol. Apparently he has only just returned from a lengthy injury but he is the type of midfielder Buriram are lacking. He was everywhere, always making himself available in both defence and attack. He is only 26 and I believe he could solve a major problem for us.

Next up is rock-bottom Air Force away on Wednesday October 3, 6pm.