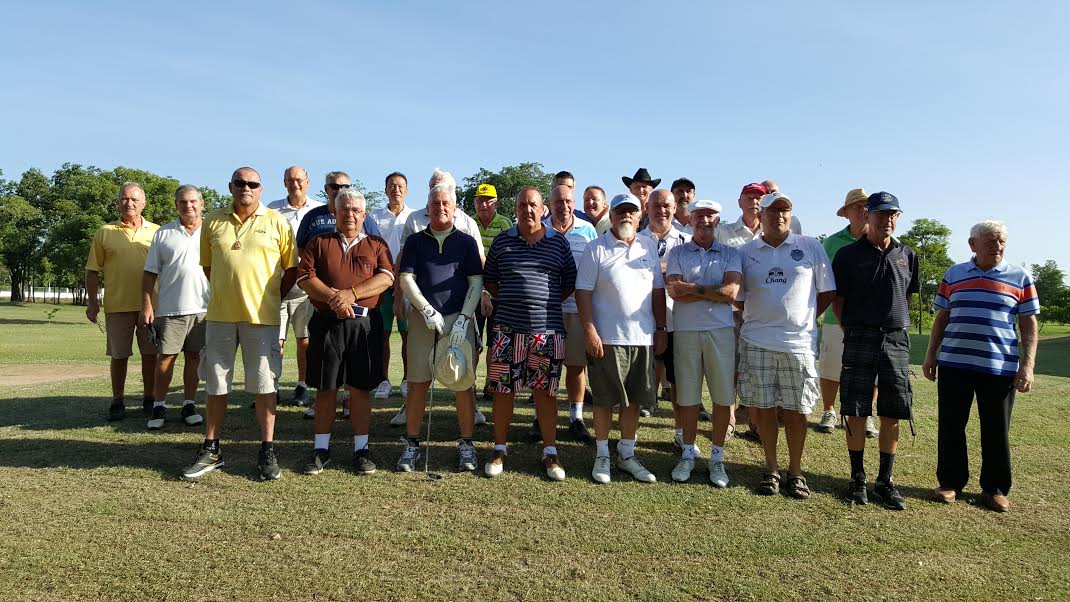 On Friday July 3rd, the Buriram Golf Society held a Texas Scramble to celebrate American Independence Day. A number of our former colonial “friends” have been prominent supporters of previous events so we thought it appropiate to honour their big day.

On this occasion it was to be a shotgun start (hence the bang, though not everyone heard it), with the eight three-man teams starting on different holes all at exactly the same time. This gives the benefit of everyone starting and completeing the round at the same time.

For those not familiar with Texas Scrambles, all three players tee-off and the best drive is selected. The other players collect their balls and play their second shots from the same place as the chosen ball. This is repeated until the ball is holed. So for every shot, you have three attempts at it. We have our own points system of four points for a birdie, three for a par, two for a bogey and one for a double-bogey.

With players not having official handicaps and being of varying levels of ability, it is difficult to work out a workable system. One of our American friends kindly put forward a suggestion which we agreed to try. All teams start off on the white tee. If you birdie it you move back to the blue tee, if you par it you remain on the white tee and if you bogey it you move forward to the red tee. 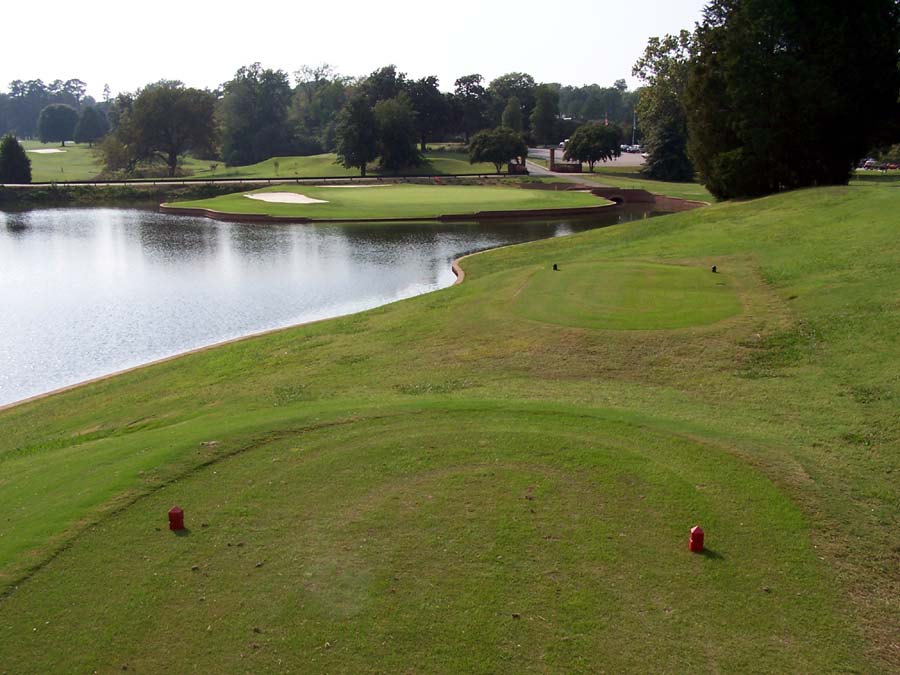 From there it’s simple. A birdie takes you back a tee, a par keeps you where you are and a bogey moves you forward, if possible. No-one was sure how this would work but as it turned out it was a great format and the scores were all grouped together. Even playing off the red tee presented a challenge as it was unfamiliar territory for all of us.

There were also nearest the pin prizes on the two par-threes, so everyone had two goes at them. As ever the golf was very enjoyable but most people agreed that this was our best event so far. This was down to the shotgun start and the new handicapping system.

When everyone had returned to the clubhouse and had handed in their cards, AND had a quick drink or two, we adjourned to Jimmy’s Sports Cafe for a meal and the presentations where we were joined by several friends who were unable to make the golf.

Sustenance Along With A Few Drinks at Jimmy’s 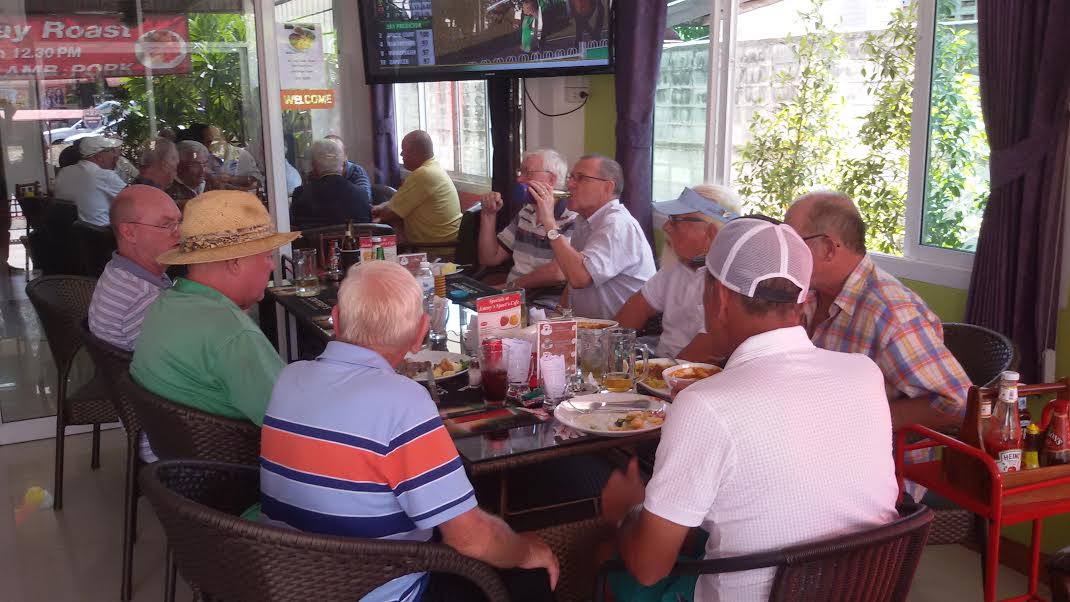 As ever Jimmy and his staff served up their usual high-quality food which was much appreciated by all those present. The beer was pretty good too.

After the meal, it was time to announce the results which were read out very clearly and with the occasional touch of humour by organizer Peter Dempsey.

Rod Young of Paddy’s Irish Bar picking up his box of Leo. 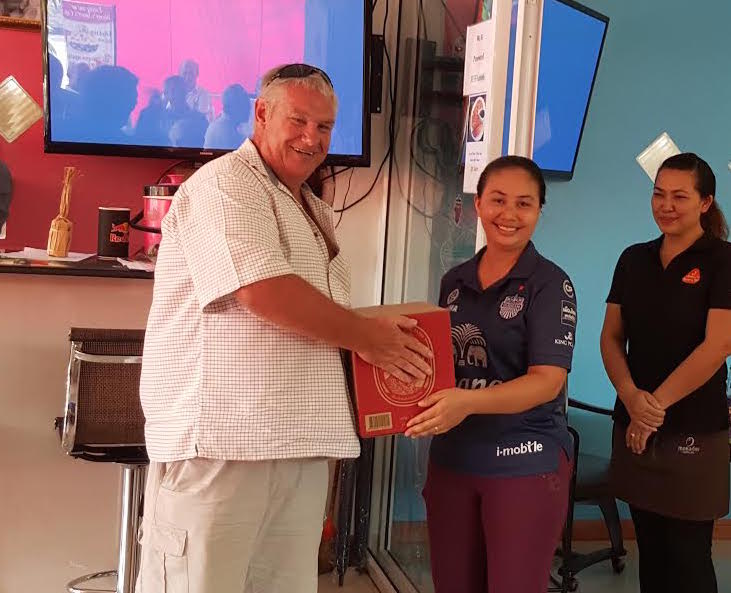 Rod’s team mate, Graham Dresser of Buriram Times, was victorious on the sixth.  Not a bad scoop for one team. 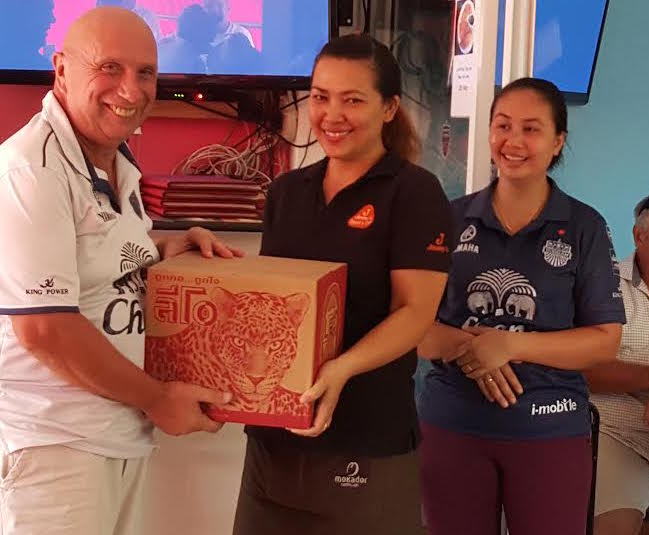 As previously stated the team scores were a close run thing and the winning team of Bill Clark, Steve McHonter and Pedro won by a single point. Their reward was a golfing umbrella which may come in handy now the rainy season has well and truly kicked in.

However, the real prize is of course the glory of winning such a highly prestigious tournament.

The winning Team of Pedro, a surprised looking Bill, and Steve McHonter 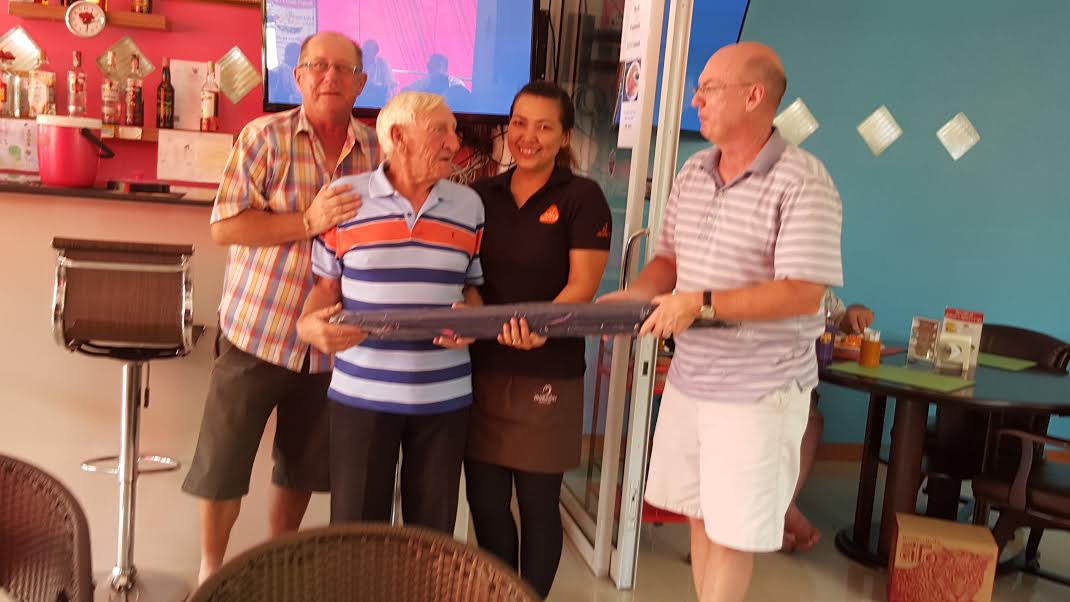 A great day, and we hope that the second Buriram Times Invitational Golf Event in October will be just as good.

At the conclusion of the presentation a vote of thanks for Peter Dempsey and “helpers” was given by a gentleman who wasn’t playing but was a very interested spectator.

He remarked that he had had a thoroughly enjoyable day. A sentiment that was echoed by all present.