Buriram booked their place in the FA Cup Final against Chiang Rai but Sisaket gave them plenty to think about, particularly in the first-half. Soukaphone’s thunderous strike has to be a major contender for goal of the season. I’m sure Siwarak will have watched a replay because he certainly didn’t see it last night !

The second-half was a different story with Buriram totally dominating possession but only had Pansa’s towering header to show for their efforts. Once again, Buriram failed to create clear chances from open play, both goals coming from corners. The midfield is an area where Buriram will have to strengthen if they are to pose a serious challenge in the Champions League. 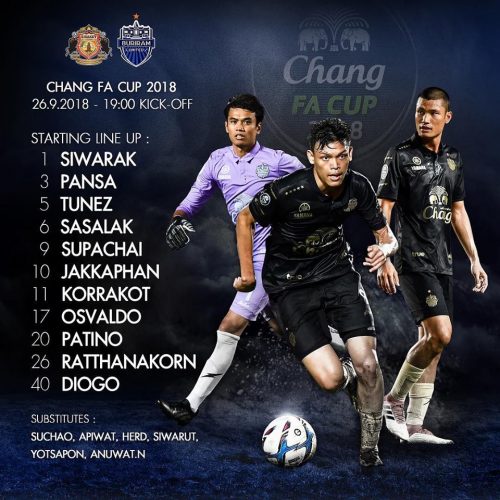 Buriram had Diogo, Osvaldo and Patino in the starting line-up but once again they failed to gel .

Patino is the one that suffers, he is a central striker and should be played as such.

The last thing Sisaket wanted was to concede an early goal but that is exactly what they did in the 13th minute. Korrakot played a right-wing corner into the near-post and Patino’s deft back-flick clearly crossed the line before the ball was hacked away.

However, the expected floodgates failed to open and Sisaket grew in confidence. They drew level in the 23rd minute when a corner was cleared out to Soukaphone who was some thirty yards from goal and he sent the ball screaming into the net with Siwarak nowhere near it. A fantastic strike !

Buriram were stung into action and in the 34th minute Diogo made a great run down the left before crossing to the far-post only for Osvaldo to make a complete hash of it. Five minutes later, Korrakot’s excellent pull-back from the left found Osvaldo unmarked but the Brazilian fired wide.

Tunez was rightly shown a yellow card in the 41st minute following a very late tackle.

Buriram started the second period brightly and Supachai had a good effort blocked in the 50th minute. Three minutes later Buriram regained the lead. Korrakot swung over a right-wing corner for Pansa to peel away from his marker before rising to send a powerful header into the net.

This time there was no response from Sisaket and Buriram took total control.  They brought Anuwat on for Patino in the 63rd minute and straight after they were inches away from extending their lead. Korrakot curled in a free-kick from the right for Diogo to head over the keeper but it struck the crossbar.

Supachai picked up a yellow card in the 68th minute and he then had a great chance in the 73rd minute but fired Korrakot’s low left-wing cross over the bar.

Skipper Suchao came on for Jakkaphan in the 75th minute and eight minutes later superb ball skills by Diogo in the left of the area set up Supachai but his low shot was blocked.

Buriram made their third and final substitution, bringing on Herd for Osvaldo in the 81st minute and were then content to play out time.

Not a great performance but in truth Buriram were rarely threatened in the second-half and will meet Chiang Rai in the final. They found themselves a goal down with a minute to go but equalized and scored twice in extra-time to beat Ratchaburi 4-2.