Mistakes at both ends saw Buriram hand an undeserved victory to Chiang Rai who once again showed they were quite prepared to use any means necessary to win the game. This ranged from foul play to play acting which makes it extremely difficult to congratulate them on their victory. Hat-trick “hero” Bill was one of the worst offenders and Henrique should be thoroughly ashamed of himself for his obnoxious confrontation with the referee as the official went to the VAR camera for the penalty. Check out 6mins 24 secs to 6mins 26 secs on the following video.

That being said, Buriram have only themselves to blame as they gifted all three goals with the usually dependable Tunez at fault for two of them. Add to that a very poor Diogo penalty and you have a recipe for disaster. 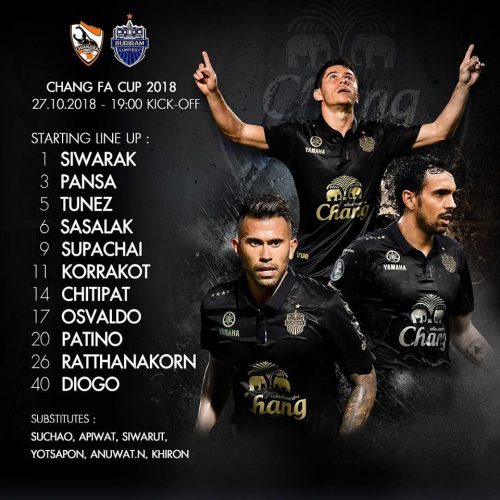 Buriram made the worst possible start in the 2nd minute when a long ball out of defence down the left was missed by Chitipat though he does have a case that he was fouled by Bill which left the Chiang Rai striker free to stroke a square pass into the empty net. It was certainly  worth a VAR review. However,it was only the second minute of the game and Tunez was nowhere to be seen.

Buriram took this set-back in their stride and went in search of an equalizer. Osvaldo was causing the Chiang Rai defence plenty of problems and in the thirteenth minute he was brought down in the left-side of the box having turned inside his marker.

Diogo stepped forward to sidefoot the penalty to the keeper’s left but the shot lacked power and direction at a perfect height for an easy save. A waste.

The equalizer came in the 25th minute and what a great goal it was. Osvaldo collected the ball in the right of the crowded area and superb close control saw him beat two defenders before finding the far-corner of the net with a low shot.

As half-time approached Siwarak had not had a shot to save but errors by Chitipat and Tunez  gave Chiang Rai the chance to regain the lead. First, Chitipat failed to deal with a harmless long ball down the left which left Henrique with a clear run on goal. He advanced into the left side of the area , though going away from goal as he turned outside Tunez. The big defender inexplicably hacked him down but incredibly the referee waved play on. The ensuing VAR review did not take long, though I believe Henrique should have been shown a red card.

Bill then calmly sent Siwarak the wrong way from the spot . Somehow, Buriram went into the interval behind but they were still looking the better side.

Buriram made the perfect start to the second-half with a 52nd minute equalizer. Sasalack received the ball wide-left before cutting inside only to be brought down on the edge of the area. The referee blew for a foul before consulting the VAR which showed that Sasalak was at worst on the line which is a penalty.

This time Diogo made no mistake with a well-placed low shot to the keeper’s left.

It now seemed that Buriram would go on to win the game but yet again another defensive error saw them fall behind for the third time in the 72nd minute.

Pansa allowed Bill the freedom to run onto a through ball down the right and the front man went on unchallenged to send a shot between Siwarak’s legs.

Sasalak picked up a yellow card in the 74th minute before Suchao came on for Chitipat. A minute later the skipper was the victim of a bad challenge which the referee deemed to  be dangerous and issued a straight red. Once again, he consulted the VAR and rightly changed the card from red to yellow.

Buriram had a great chance to level things up again in the 81st minute when Osvaldo cut into the area from the right before sending in a low shot which the keeper saved with his legs.

Patino was then replaced by Apiwat in the 83rd minute, a puzzling decision though it has to be said the centre-forward had been largely ineffective.

So a disappointing end to the season but once again Buriram’s vulnerability to through balls was exposed. This has happened on a number of occasions during the season and was due to the lack of a deep-lying midfield player. When you play three at the back, you have to have someone sitting in front of the defence , something which will have to be addressed in time for the Champions League.