Cave Rescue Shows How Humanity Can Put Aside Differences And Unite 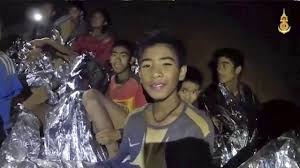 Safe and well during rescue as humanity unites.

Place Donald Trump, Prayut Chan-o-cha, Elon Musk and Mark Zuckerberg in a room together and they wouldn’t agree on many things. That goes for the rest of us too – from football lovers split into rival groups of fans with mutual dislike for each other, to believers in God who kill each other over whose version of the Supreme Being is better.

Then 13 youngsters became trapped in a flooded cave, with time running out in a hurry. Religious, political, social and sporting rivalry suddenly ceased to exist as a result. Western experts joined hands with their Asian counterparts for a frantic rescue attempt. Media outlets put ideological differences on the back burner and focused entirely on the boys’ precarious plight.

Partisanship was put aside, and, for once, football players, their coaches and their clubs welded in unison. Their singular focus narrowed down to 13 starving people desperately longing for food and daylight.

Around the world, film stars, athletes and celebrities took a break to deliver messages of hope and solidarity. In faraway lands, netizens poured their concern and best wishes through social media channels. “We are hoping every second that you see the daylight again,” Liverpool manager Jurgen Klopp, said, as rescuers battled desperately against time and rising water to save the Wild Boars football team. “The real heroes,” said his Manchester United counterpart Jose Mourinho as the world heaved a collective sigh of relief last Tuesday, “are not at the World Cup. They are in Thailand.”

Diplomacy, dictated by self-interest and geopolitical hard truths, stepped aside. This was certainly no time to talk about trade tariffs, intellectual property violations, or human rights records. International politics at the highest level was brought low, to the level of ordinary people around the world who were hanging on the fate of 12 boys and their coach in Thailand.

Social media “warriors” squabbled fitfully, but were reduced to clashing over whether the boys had been “naughty”. If anything, it was a minor parental debate with no political or religious leaning. Those who think the boys “should be spanked” and those who say they deserved a trip to the World Cup share one important thing in common – they want the kids to be saved.

Instead, the whole world held its breath, prayed as one and then cheered together. What many of us had only experienced from sci-fi movies when aliens invading Earth are vanquished, suddenly became real-life joy expressed globally as the last boy was carried from the cave.

The harmony was genuine, the anxiety very real and the eventual joy spontaneous and sincere. Why was that so? Why do we lose no sleep over the thought that some people somewhere can’t elect their own leader, but find it hard to close our eyes at night knowing that as we lie in our soft bed, a group of boys are trapped and starving in a cold and muddy crevice?

One possible answer is that while people can disagree on “political suffering”, what the Thai youngsters have been through is undisputed. When one has not eaten for days, it does not matter what his or her religious or ideological belief is. He or she will be hungry, and hunger transcends everything else. The youngsters’ suffering is completely real and universal.

This is most likely why people from different political systems, religions and races were united in their focus on the cave’s exit, which was the real route to real survival. There was no short-cut, no compromise agreement, no “road map”. Lobbying would have only wasted precious time, and so would quarrelling or foot-dragging.

The world has praised Thailand, but everyone here and abroad should pat themselves on the back, from the mothers who cooked for the rescuers to the father half a planet away who stirred his son to have empathy for the Thai boys. Everyone is part of a refreshing phenomenon that is worldwide in its scope and encompasses everything.

Nature can be cruel, but once in a while, it brings us back together. It has a strange way of reminding us what true compassion is supposed to look like and, probably most of all, that togetherness is the only true way out of a crisis.

Times comment:- This was undoubtedly one of the most memorable events of my life. The fear and concern for young people from my adopted country was very real and at times very harrowing. It was hard to see how the story was going to have a happy outcome, such was the enormity of the task. But have a happy outcome it did as probably the greatest rescue mission of all time brought them all to safety.

The whole world was united in pure joy which is something that is hard to comprehend. Everyone involved was a vital part of a huge machine that ran perfectly and it was a privilege to be able to witness how humanity could come together as one.