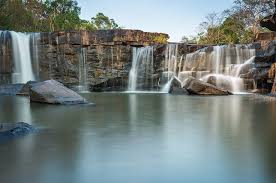 This post continues providing information on the Provinces in the North East Region.

Chaiyphum is located in the south west of the region. lying betweel Khon Kaen and Nakhon Ratchaaima.

Chaiyaphum is a place where many periods of civilization have overlapped one another from the Dvaravati and Khmer periods to the Laotian or Lan Chang eras. Many archaeological remains and objects were found in many areas in the province. Later, the province appeared as a border town during the reign of King Narai the Great of the Ayutthaya period. After that, the town was abandoned and reappeared once more in the Rattanakosin era as a destination where the Vientiane people, led by their leader Lae, emigrated to. He was designated as the first governor of Chaiyaphum.

The main problem most tourists will have is that this is not a tourist destination. As a result, little English is spoken, or written on hotel/restaurant menus, etc. It is a charming little city though, and everyone is friendly. You should be able to bluff your way through easily enough.

Things to see in the province.