Buriram were crowned Thai League 1 champions following their 2-0 victory over a spirited Police Tero side. Even if the highly improbable happens and Buriram lose their last three games and Bangkok United win their last four, the title would still go to Buriram on the head-to-head rule.

Diogo scored his 30th league goal of the season and it’s a sobering thought to see that the next highest scorer is Edgar with 8. Even Diogo missing a penalty could not spoil the Brazilian’s night and he has been far and away Buriram’s best player all season. 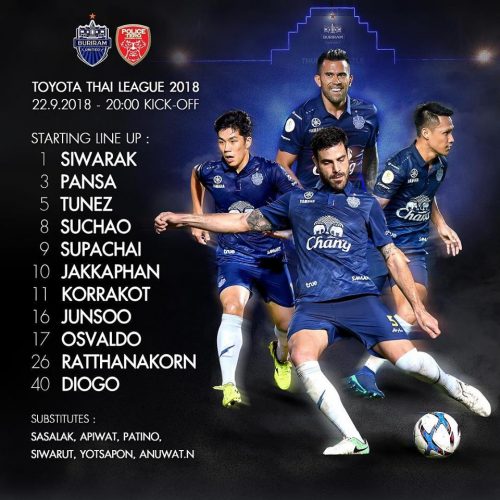 Both sides started brightly and Siwarak had to turn a right-wing cross over the bar in the 5th minute before Buriram took the lead five minutes later.

Osvaldo threaded a great ball through for Diogo to run onto and round the keeper before placing the ball into the empty net from a tight angle.

It could have been two in the 17th minute when Osvaldo was played through down the left but his attempt to curl the ball in at the far-post was hopelessly wide.

Buriram were causing the visitors problems down the flanks and in the 25th minute Diogo crossed low from the right for Osvaldo to thump a shot against the underside of the bar. The ball came back towards Korrakot who was clumsily bundled to the ground from behind and the referee pointed to the spot.

Diogo’s penalties have been a formality this season but this time he sent a weak shot straight down the middle which the keeper saved with ease.

Tero had the ball in the net in the 29th minute but it was correctly ruled out for offside.

Osvaldo got free again down the left in the 32nd minute but he pulled a disappointing shot wide. Suchao then picked up a deserved yellow card in the 38th minute for a careless challenge.

Buriram should have been out of sight but missed chances meant that Tero were still well in the game.

The second-half started rather sedately with little goalmouth action. Buriram brought on Anuwat for Suchao in the 56th minute and two minutes later Buriram were inches from their second. Osvaldo swung over a left-wing corner for Tunez to get in a firm header which the keeper just managed to tip onto the bar.

Not long after, Jakkaphan picked up a yellow card following one of his “trademark” tackles and Ratthanakorn followed him shortly after for a similar offence.

Buriram began to look more dangerous and Diogo headed on a ball in from the left only for Osvaldo to lift an attempted lob high and wide.

The second goal finally arrived in the 74th minute when Jakkaphan played a lovely ball through for Osvaldo to send a shot against the post. The ball came back for Korrakot to coolly dispatch into the net.

That was Osvaldo’s last contribution as he was replaced by Patino in the 75th minute.

Tero were unlucky not to be awarded a penalty in the 86th minute when N’diri raced clear only to have his heel clipped by the advancing Siwarak. However, the referee decided the French striker had dived and issued him a yellow card. Very unlucky.

His night got worse in the 89th minute when he headed in a left-wing cross, only to be rightly adjudged offside.

Buriram brought on Aniwat for Supachai in stoppage time before the referee signaled Buriram’s sixth title in eight years. A remarkable achievement.

There are a number of questions to be asked about several players but now is not the time. Let’s enjoy the rest of the season and allow the players to bask in the glory of yet another league championship.

Buriram next face Sisaket in the FA Cup semi-final on Wednesday September 26, 7pm. The game will be played in Bangkok at Police Tero’s ground.