Diogo took his tally for the season to 34 with a hat-trick and also recorded his 100th league goal for Buriram. It was an open game with both attacks giving the defences a torrid time. Buriram changed their entire defence and it showed as they were breached twice by the clinical Vincent. Suphanat came into the right of midfield and gave an assured performance before succumbing to cramp. 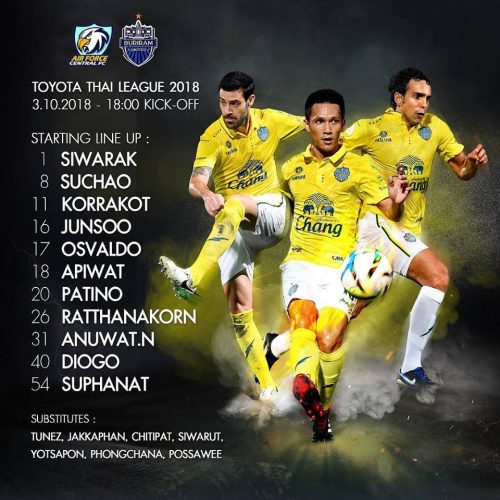 Rock-bottom Air Force played some excellent football and were a constant threat. However, their league position is down to a woeful defence but it did make for an entertaining game and both sides could have scored more.

The first chance fell to Buriram in the 7th minute when Korrakot crossed from the left for Diogo to fluff an attempted volley when completely unmarked.

Ten minutes later Diogo was put through on goal but shot well-wide, though in truth, he should have been flagged offside. Buriram should have gone ahead in the 19th minute when Suphanat sent over a superb cross from the right for Patino to rise unchallenged but he sent his header wide when he really should have scored.

The referee denied Buriram a penalty in the 25th minute when Diogo was brought down from behind when through on goal. The defender did get a foot to the ball but now if you also take the man, it is a foul.

Diogo threatened again in the 30th minute but headed Korrakot’s left-wing cross wide. The deadlock was finally broken in the 41st minute when Osvaldo sent over a perfect inswinging corner from the left for Diogo to send a downward header up onto the underside of the bar and into the net.

It was something of a surprise that only one goal was scored in the half and it seemed likely that more would follow.

Air Force shocked the champions by equalizing in the 50th minute. The ball was crossed in from the left for the completely unmarked Vincent to head past a helpless Siwarak. Dreadful defending.

Buriram  hit back immediately in the 54th minute when Diogo’s powerful header from Osvaldo’s left-wing free-kick gave the home keeper no chance.

However, back came the home side again to level things up two minutes later.Buriram made a complete hash of a throw in and Air Force progressed down the right before the ball found Vincent again completely unmarked and he made no mistake.

Suchao picked up a yellow card in the 61st minute and Suphanat was replaced by Phongchana in the 63rd minute due to severe cramp. However, the youngster had done enough to once again show he is a star in the making.

Buriram regained the lead in the 74th minute when Diogo was brought down just outside the area as he was running in on goal. He picked himself up and sent a fantastic shot over the wall and past the static keeper. A superb strike !

Jakkaphan came on for Anuwat  and shortly after Ratthanakorn was shown a yellow card following a clumsy challenge.

There was no way back for Air Force this time and deep into stoppage time Possawee came on for Osvaldo. The youngster made a dream start when he slipped a neat,short pass to Patino who burst into the box before finishing in style. A great goal.

An enjoyable game and Buriram just about got away with the changes at the back. A win at Ratchaburi on Sunday October 7, 6pm will see them set a new league points record of 87.

Unfortunately, there will be no match report as I am flying to England on Sunday morning.