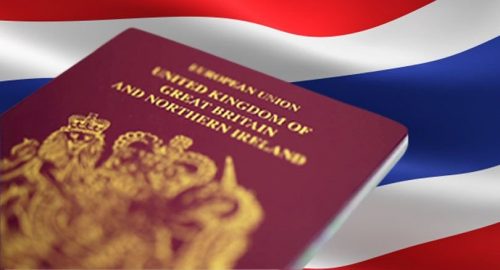 A Pattaya Radio station said that the issue of the British Embassy stopping providing certification of income letters to its nationals means an end to the easy ride of foreigners living in Thailand.

The report on Fabulous103FM said they had contacted the embassy who said there were not now in a position to ensure financial statements were correct.

They and perhaps other embassies could not be held liable for financial details.

Fabulous103FM – that operates out of Pattaya – stated that those caught offering “under the table” payments would be “caught out”.

The changes come in the wake of Maj-Gen Surachate Hakparn taking over as the new chief of immigration last week.

“Big Joke”, as he is affectionately known in the media, has promised to get tough on criminals.

Fabulous103FM said that while foreigners were still welcome it was clear that “the gloves were off” now and the “heat is on” for expats in Thailand without a visa*.

They also said that companies offering “visa services” were coming under scrutiny.

It is not yet completely clear as to whether the change is as a result of British Embassy policy or they have reacted as a result of pressure from the Thai authorities.

Requests to several people at the British Embassy for comment and clarification have been made but no replies have been received except a standard automated reply that one of their officers was out until Wednesday.

However, the Canadian Embassy in Bangkok said on Tuesday “There is no plan to change anything related to income letters for the immediate future.”

Responses to a story on the issue revealed that an increasing number of expatriates and people living in Thailand were seriously concerned about their future.

Some stated on a thread that they were considering leaving Thailand.

Many others commenting believed the move was likely to have been ordered by the Thai authorities in a bid to close a loophole that allowed those who have insufficient funds or income to remain in Thailand long term.

Other expats questioned how the new requirement would be interpreted and implemented by immigration offices in Thailand, which are known for their inconsistency when it comes to enforcing rules.