Extensive Flooding In Chaiyaphum And Yasothon 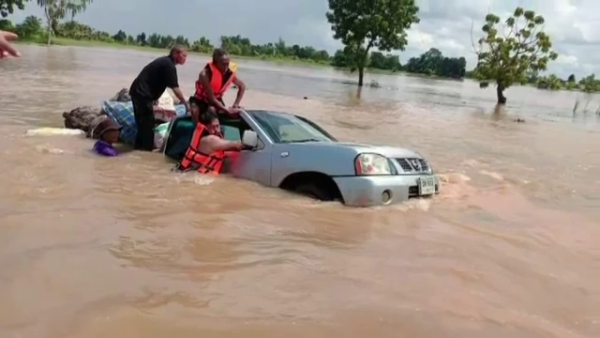 n the north-eastern province of Chaiyaphum, train services between Kaeng Khoi and Bua Yai have been suspended temporarily, pending repairs, after about 50 metres of the track became submerged and several railway sleepers became dislodged.

One fully-loaded pick-up truck was swept off a road by strong currents into a ditch in Ban Khwao district. The driver was rescued by local villagers.

A local official said that it was the second flood in Muang district this year, as they blamed excess water being discharged from the Lam Prathao and Huay Yang Pa reservoirs.

Wang Sa Phung and Muang districts of the north-eastern province are also flooded, with residents in Ban Na Bon, Chaiyapruek sub-district, complaining that this is the third flood of the year.

Over 800 hectares of rice fields in Kham Khuean Kaeo district of Yasothon are submerged and the road linking the district with Amnat Charoen province has been closed to all traffic, as more than 4km of the road is heavily flooded.