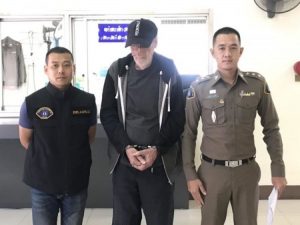 A 74-year-old German who is suspected of stabbing his teenage wife to death has been arrested after almost a decade on the run.

Heinz Jurgen Theil was arrested in Chiang Rai province on Tuesday and held on charges of murder.

Police said Theil stabbed his 17-year-old wife, Janjira Jantapool, at the house they shared in Chiang Rai province in 2010.

Janjira was found with more than twenty stab wounds all over her body, including her face.

Police say that Theil had lived in Thailand for twenty years and began a relationship with Janjira when she was just 14 years old.

Theil was married once before but his first wife had died, police said. The pair had a daughter.

Theil began the relationship with Janjira following the death of his first wife.

Janjira then took her disabled father to live with Theil in a house in Chiang Rai, where they lived up until her death.

Thai news site Siam Rath reported that Theil was held for murdering Janjira back in 2010.

He was then released after paying 400,000 baht bail and has been on the run ever since.

Police said since going on the run he had frequently moved house and lived in many provinces in northern Thailand.

Police then learned that Theil was back in Chiang Rai province where they arrested him outside a clinic in Muang district on Tuesday.