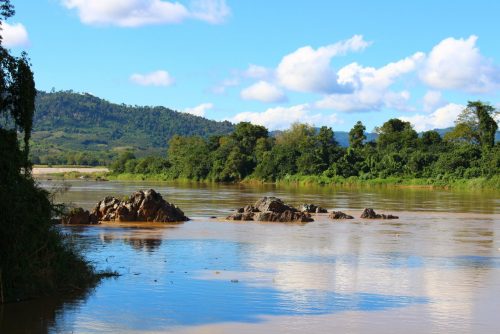 Residents are looking at an uncertain future as the Cabinet gives the go ahead to the blasting of the Mekong River rapids.

Many rocky shoals (“khon”), sand-dune islands (“don”), and steep rocky riverbanks (“pha”) can be seen while travelling along the river. These geographical characteristics are unique to the Mekong River from Chiang Saern district in Chiang Rai to Luang Prabang in Laos, and for a long time local people have developed their culture and way of lives to be in harmony with the nature of the river.

However, he fears that everything is going to change, as an international project to improve the river’s navigation route, allowing barges larger than 500 tonnes gross to travel along the river all year round was approved by the Cabinet this month. This has caused wide concern among locals living along the river in Thailand.

Residents in Chiang Rai’s Chiang Khong district fear that the plan to improve the navigation route will kill the river’s ecosystem and destroy their livelihoods. They are concerned that their way of life and cultural identity, which is strongly associated with the river, will become disappear.

Khon Phee Lhong, a group of rocky shoals around a kilometre long in the river, can be seen above water during low tide and is an obstacle preventing large barges from passing through that area. It is on the list to be demolished.

“Khon Phee Lhong means the rapids [Khon] that the corpses [Phee] cannot make their way past on the river [Lhong],” Chalin said. “In the past, if someone drowned in the river upstream, the people would come here to search for the body because the turbulent current and whirlpools caused by underwater rocky rapids would bring the body from underwater to the surface and float in the area.”

He pointed to many frightening whirlpools in the river, and added: “This is a dangerous spot for both boats and people. The river current is very strong and can easily sink a boat driven by an inexperience driver.”

The canalisation plan for the river involves the Marine Department surveying the navigation route along with China, Myanmar, and Lao officials to turn the river into a transport route from Jinghong in China’s Yunnan province to Luang Prabang.

“I do not agree with the rapid-blasting plan because the rapid explosions will not only deface the river, but they will change the course of the river and affect the flow of the river; the river’s flow will become stronger, which is dangerous for small boats,” Chalin said.

He also said the removal of the rapids would not only affect transport, but also the activities of people who rely on the river’s shoals and its ecosystem, including traditional fishing. The river’s algae and plant life along its banks will also disappear, he warned.

“Every bend, cliff, and rapid in the river has its own tale and some even have spiritual value for the locals. Our cultural identity and way of life is strongly bonded with these river features that will disappear, if the project goes ahead … we will loss everything and only China will get the profits from the river transportation,” he said.

The ferry pilot said he would be among the first to suffer from the implementation of the canalisation project, and he feared losing his only income – about Bt15,000 per month. “I’m too old to change career. I don’t know what to do because I have driven a boat on this river all my life,” he said.

Another local fisherman and ferry driver, said he still fished on the river even though fish stocks had greatly declined because the water flow was now unnatural due to the construction of dams upstream.

“The rocky rapids are the good areas to use a fishing net because the fish usually live in the underwater rock caves and during the dry season we can harvest gai from the rocks,” he explained, pointing to several fishing rods and nets placed on the rapids.

“I cannot catch fish anymore, if these rapids are removed. But I cannot do anything if the government has already made its decision to carry out the plan. The river is now nearly dead and if the project goes ahead, it may get worse.”

The Prime Minister stressed last week that all of the rapids in Mekong River did not belong to Thailand. He said the government and related agencies were carefully considering the navigation-route improvement project in all aspects, so people should not be too concerned about this issue.