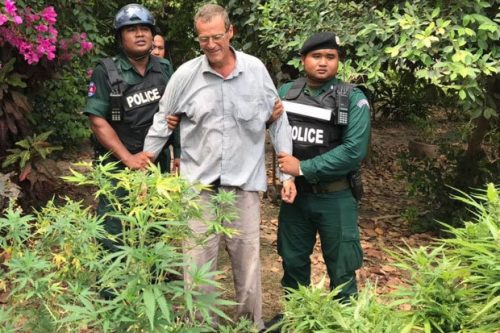 POTTY: Wayne Brewer grins as he is arrested at a marijuana farm in Phnom Penh

Wayne Brewer fled the UK in 2006 before he could be sentenced for an assault.

But he was arrested  at a rented house in the Cambodian capital of Phnom Penh.

It was at first believed that police were acting on a tip-off from a friend.

But it was later thought that Brewer was caught by chance after refusing to help a local farmer whose cow had wandered on to his land.

The farmer called police to help retrieve the animal but officers found 25 large cannabis plants and an oil drum full of the drug at the property.

There were also 53 empty barrels, which detectives think were previously used to grow marijuana.

Pictures of the arrest showed Brewer grinning as he was led away.

A Cambodian Police spokesman said: “Detectives suspect Mr Wayne Brewer, a 50-year-old British national, to be the owner of the plants.

“We are now questioning suspects before they are sent to the Phnom Penh Municipal Court for legal action.”

Cannabis is illegal in Cambodia but the law is not routinely enforced.

Bars and restaurants, especially in tourist areas, frequently put items such as “Happy Pizzas” on their menu, meaning they are spiked with cannabis.

In 2015 the Met Police released a mugshot of Brewer, from Brent, west London, in an attempt to track him down.

It is unclear what punishment he could receive over the marijuana farm or if he will be extradited to the UK, where he was convicted for before fleeing.