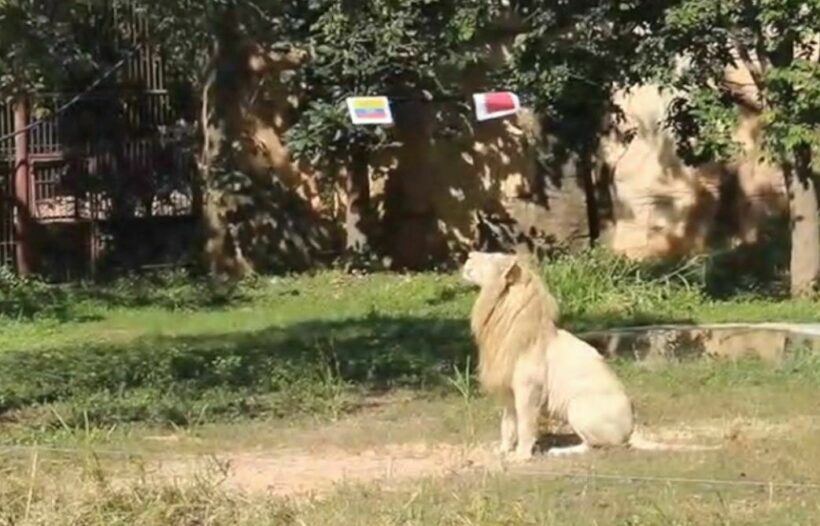 A lion named ‘Chao Boy’ at Khon Kaen Zoo in northeast Thailand has made his first predictions for the World Cup 2022which kicks off in Qatar on Sunday.

Chao Boy makes his predictions by eating chicken. Staff at the zoo hang chickens from flags and hoist them into the lion’s enclosure. Chao Boy jumps up and devours the chicken beneath his predicted winner.

The first match of the tournament will kick off at 11pm on Sunday between Group A teams Qatar and Ecuador. The lucky lion got loads to eat as staff at the zoo ran the test three times to see who Chao Boy thinks will win the first match.

Two out of three times, Chao Boy ate the chicken under Qatar’s flag, meaning that he believes the host team Qatar will be victorious in the opening match.

The prophesying lion has also made predictions for the two matches scheduled for Monday, November 21: England v Iran at 8pm and Senegal v Netherlands at 11pm. Chao Boy predicts England and the Netherlands will be the respective winners.

The zoo says that Chao Boy loves making predictions in football and it’s a fun way for him to get some exercise, relieve stress, express natural behaviour, and get enough nutritious food.

Chao Boy must have heard the news that the Sports Authority of Thailand (SAT) managed to sort out a deal with FIFA to obtain the broadcasting rights to the World Cup. After a tumultuous few weeks of bartering and discussions, Thai people will definitely be able to watch all 64 matches of the contest for free on TV.

Khon Kaen Zoo says the predictions are just a bit of fun and said they are not trying to encourage gambling in any way because it is illegal in Thailand.