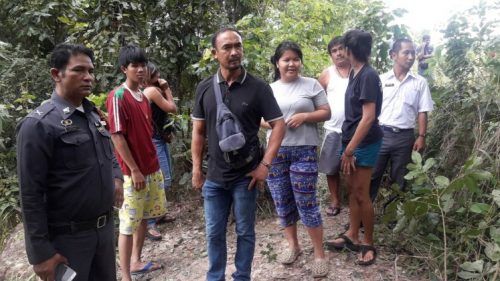 At around midday on July 7th, Police and emergency services received reports of a headless body that had been found in a woodland area on the outskirts of Pattaya.

Arriving at the scene, police estimated that the whole area covered just over 1 rai of land.

Police were led into roughly 100m into the bushy area by locals who had stumbled across the dead body.

The victim was a Thai male, 23 years old, and was found wearing jeans and a shirt. He had a key to what looked like a motorbike and a mobile phone charger in his pockets. A couple of tattoos were also found on the body. The victims head was found nearby, totally separate from the body.

None of the locals recognised the victim, but after a brief examination by paramedics they were able to estimate judging by the decomposition of the body and loss of colour that the victim had been dead for around 4-5 days already.

The body was taken away to a local hospital for a full postmortem examination. As of yet, police have very little clues which may point them in the right direction as to what caused the victim’s death and who may or may not have done it.

They are waiting for the results of the postmortem examination before carrying on with the investigation.