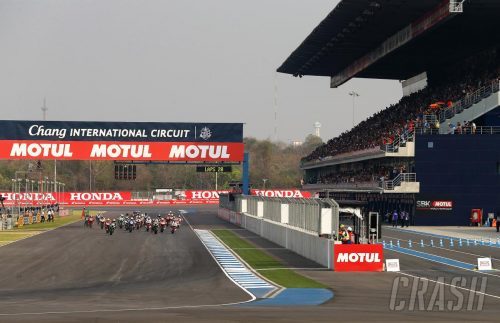 Thailand’s inaugural MotoGP round will be held at the Buriram circuit in 2018.

The event was officially confirmed in Bangkok on Thursday, when Dorna CEO Carmelo Ezpeleta and Thailand’s Governor of Sport Sakon Wannapong put pen to paper on a three-year contract.

But there was still no confirmation of the event date.

“Today the Sports Authority of Thailand and Dorna Sports signed the contract for the Grand Prix of Thailand to be at the circuit in Buriram from 2018 to 2020,” declared Dorna CEO Carmelo Ezpeleta.

“Thailand is a big consumer of bikes also and they are happy to use MotoGP to develop tourism here in Thailand. We are very proud to have made this agreement with the Thai government.

“The races here so far have been Superbike – who will also renew the contract in the near future – and we see that there’s a lot of expectation. MotoGP has had a lot of interest in Thailand, and it’s sure to be a Grand Prix with a lot of interest from everyone.

“We need to fix some of the dates but the calendar is finished, and I hope we can soon announce the draft calendar for 2018.”

Local media have previously reported October 5-7, which would link Thailand with the current Japan-Australia-Malaysia ‘flyaway’ rounds.

The rumoured options are for Buriram (which hosts the Thai WorldSBK round in March) to either be a standalone event before that triple-header, or placed back-to-back with Japan followed by a weekend off before Australia and Malaysia.

An official 2018 pre-season test is also expected to be held at the Valencia-style 4.554km track in February, instead of Phillip Island.

Buriram joins Sepang in Malaysia as the second country in South East Asia on the 2018 MotoGP calendar. Indonesia also hopes to join the calendar in the near future but needs a suitable circuit, while Finland has its return secured for 2019.

“We would like to say thank you the circuit of Buriram and to Carmelo, and thank you to the media. There are a lot of media here today, and that means that a lot of people will be very interested in the race.

“It is a challenge for Thailand to be the host of MotoGP, but beyond the circuit, it will also be good for infrastructure of Thailand – to upgrade the airport, to get ready for everyone to go to the circuit. Not only for Buriram, but also the area and the north eastern part of Thailand.

They welcome this major event to the north east, and believe the economic and the tourist impact will be very good for Thailand. Thank you to Dorna Sports for coming to Thailand with MotoGP.”

General Tanasak Patimapragorn, Deputy Prime Minister of Thailand, stated: “We are happy that MotoGP is coming to Thailand and you can see that this is a very good deal for everyone, and all the stakeholders in motorsport fully support it. Even though they are competitors, they have all come together and would like MotoGP to happen in Thailand.
(Source:- Peter McClaren & Crash)