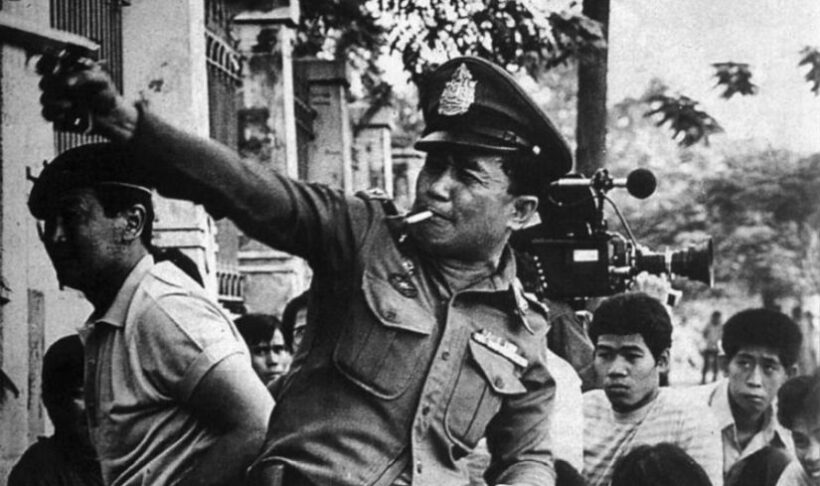 No one has ever been held accountable for the tragic massacreof peaceful demonstrators at Thammasat University on October 6, 1976.

On this day 46 years ago, Thai police, military, and ring-wing paramilitaries shot, lynched, and beat leftist demonstrators protesting the return of dictator Field Marshal Thanom Kittikachorn to Thailand, who was ousted in 1973. The 1973 uprising restored democratic rule in Thailand.

On September 24, 1976, two activists were beaten to death by police and hung from a gate by Thai police for posting anti-Thanom posters. On October 4, demonstrators reenacted the hanging.

A photo of the mock hanging appeared on the front page of Dao Siam newspaper on October 5, which said that the student in the photo looked like Crown Prince Vajiralongkorn (the current King of Thailand).

The police, military and rightist paramilitary forces such as the Village Scouts, Nawaphon, and Red Gaurs accused the protestors of lese majeste. Around 4000 of them gathered at Thammasat University on the night of October 5 and began their violent crackdown in the early hours of October 6.

The police and paramilitary forces shot demonstrators with assault rifles, machine guns, pistols, grenades, recoilless rifles, scoped rifles and anti-tank guns. Students who dived into the Chao Phraya river to escape were shot at by the navy.

Despite the scarce mention of the violent crackdown in Thailand’s history books, the massacre lives on in the Thai people’s collective memory. The event is at the back of any protestor’s mind who joins democracy protests in present-day Thailand, which are ongoing.

Sadly, families of victims massacred 46 years ago report that authorities have curbed their efforts to hold commemorative events for family members lost to violence even still.

No probe into who is accountable for the murders has ever been taken seriously. Whoever instigated and took part in the shooting, beating and lynching walks freely in Thailand and elsewhere today, if they are still alive.

Thailand plummeted into military dictatorship again following the massacre, which abruptly ended the student-led democracy movement. On the evening of October 6, the military seized power from the democratically-elected government of Seni Pramoj and instated royalist Thanin Kraivichien as Prime Minister.

Numerous protestors who managed to escape that day fled into the jungle out of fear, some joining communist movements. The violent crackdown and coup that followed were born out of fear that Thailand would fall to the hands of Communists like their neighbours Laos and Cambodia did the previous year.

American photojournalist Neal Ulevich who was at the massacre won a Pulitzer Prize for Spot News Photography in 1977 for his collection of “photographs of disorder and brutality in the streets of Bangkok.” Perhaps the most famous image is a right-winger striking the lifeless body of a hanged student with a chair.

Rumours that the policeman holding a gun in the feature picture of this article is Bangkok Governor Chadchart Sittipunt’s father have since been dispelled. Chadchart’s father allegedly had a role in the crackdown but he is not the man in the photo. The man in the photo is Watcharin Niamvanichkul, a policeman who died earlier this year.