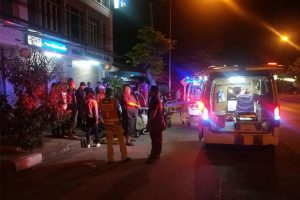 An ambulance stands by to take injured people to the hospital after a speeding pickup truck struck 10 vehicles in Buri Ram early Saturday. The driver is still at large. (Photo by Surachai Piragsa)

Nine people were hurt, two seriously, when a speeding pickup truck crashed into 10 vehicles early Saturday. Police gave chase but have so far failed to catch the driver. The frightening incident occurred at around 1.30am when the speeding Mitsubishi Triton rammed into several motorcycles riding on a road in front of Buri Ram Rajabhat University.

Witnesses were unable to get a good look at the licence plate.

The pickup driver then sped off and struck another motorcycle and a police pickup truck parked along a road near the Lively market. It then rear-ended a car waiting at the lights at the Sensiri intersection in Muang district. The driver did not stop but accelerated to hit another motorcycle at the intersection before fleeing. Many panicked passersby ran for safety.

Police who rushed to the crash scenes found nine people injured, two of them badly. A total of 10 vehicles — eight motorcycles, one car and one police pickup — were damaged.

Police and rescue workers gave chase along the escape route to Nong Phrue village in Muang district, but they were unable to stop the speeding pickup. Officers are examining images from closed-circuit security cameras to see if they can learn more about the vehicle and its driver. 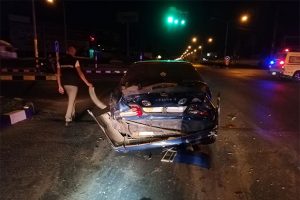 This car sustained heavy damage after a speeding pickup rear-ended it at an intersection in Muang district of Buri Ram early Saturday. (Photo by Surachai Piragsa)

Kanchana Teerasuwan, 33, told police that she and her son were inside the car driven by her husband when it was rear-ended. They were returning home after selling goods at the provincial Red Cross fair and were waiting at the traffic lights at the Sensiri intersection when the car was hit.

The impact of the crash threw her son, who was sleeping in the back seat, into the front seat. Her husband immediately took their son out of the vehicle.

Thawat Ponsen, another victim, said he and five other friends were riding home when the pickup truck rammed into their motorbikes in front of Rajabhat University. Two of his friends were badly hurt: one suffered a broken leg and another had bleeding on the brain and was still unconscious. 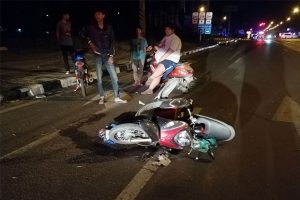 One of the eight motorcycles struck by the speeding pickup lies on the road in Buri Ram. (Photo by Surachai Piragsa)