Nok Air To Cut And Reschedule Flights To Counter Delays 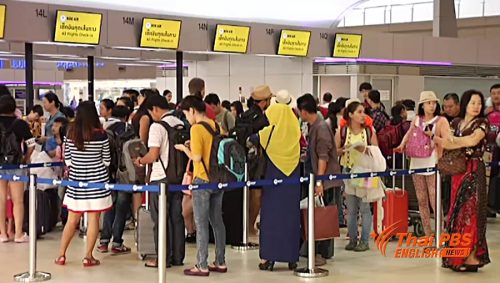 Nok Air airline has decided to reduce the number of its flights to avoid the problem of flight delays and, at the same time, has put on standby two planes to be brought in from U-tapao airport in case there is a problem of a plane malfunctioning, said Nok Air CEO Piya Yodmanee.

Due to smoke problems from forest fires which usually takes place in the morning for flights in northern provinces, he said the airline would reschedule the morning flights for the routes to Tak, Lampang, Mae Hong Son and Loei to the afternoon.

However, during the Songkran festival, two more flights for the four routes will be added each day to cater for the increasing demand of travelers, said Mr Piya.

Starting May until September, Nok Air will reschedule the timetable of some flights during the dry season and cut down five flights a day during the period.

Nok Air management on Friday (March 30) met with senior officials of the Civil Aviation Authority of Thailand led by Mr Chula Sukmanop at the CAAT head office to discuss Nok Air’s frequent flight delays which have attracted a lot of criticisms from domestic travelers.

Mr Chula said flight delays were caused by a number of factors, including turbulent weather and congested air traffic.  He said Nok Air agreed to train a group of its staff who will deal with passengers in case of flight delays and to put on standby two planes which will be put into service in case of emergency.