After the beauty dust has settled and the glitter is wiped away, it seems all is not well with the latest Miss Universe Pageant. Taking place in Bangkok recently, new revelations have surfaced surrounding one of its entrants and, notably, her plastic surgeon.

Aesthetic and rhinoplasty surgeon, Froilan Paez, took to social media in order to post pre and post-op images of one of his clients. Displaying the fruits of his labour, former Miss Venezuela 2017 Stefany Gutierrez’s transformation was uploaded to Mr Paez’s Instagram account.

What looks like part of a ‘thank you’ posting, Mr Paez tagged Venezuela’s most beautiful woman declaring her “a true diamond that knew whom to trust to get its best shine.” However, it appears that the beauty queen is not the first model to crop up in his particular feed.

Delving a little deeper shows a host of ‘nose job’ patients who have gone under the knife, including those from previous beauty contests. Utilising various hashtags, it does seem that Miss Venezuela 2017 did undergo rhinoplasty before taking to the stage. 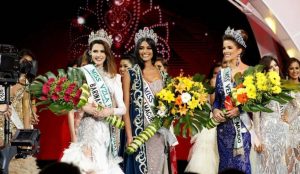 “Trans women have been persecuted and erased for so long. I’m showing that trans women can be whatever they want. I am proud to have the opportunity to use this platform for a message of inclusion, tolerance and respect for the LGBT+ community.” she said

Since 2012, The Miss Universe Organisation has lifted its ban on entry for transgender contestants which has raised awareness on the subject. With Catriona Gray from the Philippines taking victory, the Thai capital saw the Miss Universe contest beamed to nearly 200 countries across the world. The TV audience is just as great and usually attracts half a billion viewers every year.

Speaking to Thomson Reuters Foundation, Ponce explained that trans children often have to deal with mental health issues such as depression.

“I was born into a world, into a society which really wasn’t prepared for me. So many children face discrimination for being different. It is important to tell them they have a right to be who they are, who they want to be,” she added.

In fact, gender reassignment in Thailand has gathered pace as Darren Lyons of MyMediTravel explains;

“Thailand has long been considered at the forefront when it comes to transgender surgery. Gender-affirming surgery is firmly on the map with as many as three patients travelling to Thailand daily for this procedure.”

“This is coupled with a growing supply of highly trained surgeons utilising years of experience to provide low-cost medical care to overseas patients. What better way to relax and recuperate post-treatment than at a nearby resort moments from one of Thailand’s pristine shorelines.”

All of this comes against a large shift in Thai law as the country readies itself to pass a bill allowing same-sex unions. Consequently, they will become the first country across Asia to pass this specific law.