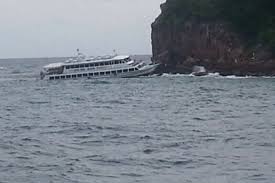 In seeking to pass the blame, Deputy PM Prawit has deeply wounded the Chinese families of victims from the Phuket disaster

Just days ago relatives of nearly 50 Chinese tourists who died after their boat capsized near Phuket issued an open letter of gratitude for the response of Prime Minister General Prayut Chan-o-cha. In the same letter, however, they did not mince words about their contrasting feelings towards his deputy, General Prawit Wongsuwan.

They thanked Prayut for rushing to Phuket to offer comfort to relatives of the victims but pointed to the fact that just hours before the PM arrived, Prawit had shown extreme insensitivity in pointing the finger of blame.

Prawit told local reporters that the boat’s tour operators were Chinese nationals who neglected safety warnings from the Meteorological Department. He concluded that the tragedy was a result of “Chinese nationals doing this to Chinese tourists”.

That statement was grossly offensive and designed to deflect the blame elsewhere. It was tantamount to claiming the incident had not occurred in the Kingdom of Thailand, the letter said.

The grieving relatives pointed out that their family members had come to Thailand legally and the very least they expected was for Thai authorities to ensure the basic safety of visitors.

They called Prawit’s statement “irresponsible” and contrary to the warm relations between the two countries that the Thai government often describes as brotherly love.

The relatives said Prawit could not retract the insulting words. They also accused him of being indifferent in his personal demeanour, “as if he was getting some satisfaction from the sufferings of other people”.

“Is this the statement of a man with a conscience?” the letter quoted one survivor who lost four family members in the tragedy.

Relatives said the pain that Prawit had inflicted upon them would remain for a very long time and asked that the deputy PM would meet with them directly to explain himself.

The letter was dated July 11, six days after the Phoenix sank after being hit by a huge wave in the Andaman Sea.

Although Prawit apologised for his statement, the relatives’ letter has dismissed the apology as lacking in sincerity or contrition.

Indeed, too often we witness how senior Thai officials are quick to place the blame elsewhere instead of dealing with the issue at hand in a responsible manner.

Such a response requires some degree of sensitivity and rationality, especially after accidents in which many innocent people have lost their lives.

A tragedy of this scale deserves better than just an unsympathetic statement that points fingers elsewhere.

It mattered not whether the tour company was run by Chinese nationals or Thais. Nothing justifies Prawit’s response, especially when a thorough investigation had yet to begin.

The situation called for moral support, sympathy and understanding, not a hair-trigger impulse to cast blame elsewhere in order to escape responsibility for anything.

Like it or not, this tragedy took place on Thailand’s territory and it is the responsibility of the Thai government to ensure that humanitarian assistance is provided to the victims. As to the issue of accountability, that can come later.