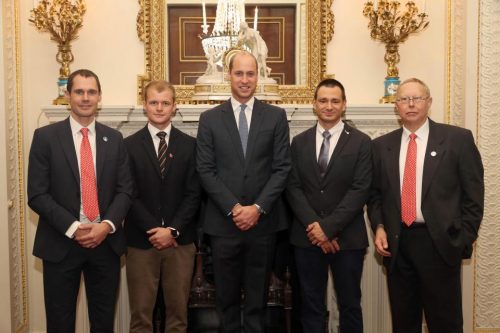 Prince William has been meeting some of the heroes that made up the Thai cave rescue team that helped save the lives of 12 schoolboys.

The Duke of Cambridge – who is patron of Mountain Rescue England and Wales – held a reception at Buckingham Palace for the British divers who took part in the dramatic cave rescue of twelve trapped boys who were part of a youth football team and their coach.

Among those present at today’s reception were Christopher Jewell, Lance Corporal Connor Roe, Jim Warny and Martin Holroyd who all played their part in saving the trapped boys.

Lieutenant Colonel Toby Hammett, who helped coordinate the rescue from the UK, was also expected to attend.

The Prince told them he was “very proud” of their efforts.

The second-in-line to the throne reminisced about his own time underground when he was reunited with caver and cave diving expert Martyn Farr, who had taken the duke and his brother on a subterranean adventure in Wales in 1999.

He also heard the story of one volunteer who drove at speeds of up to 110mph on his way to Heathrow Airport to deliver two vital diving masks – behind a police escort.

The Duke who is a keen diver and president of the British Sub-Aqua Club, said during the palace reception: “Well done guys, it was fantastic, it really was. You should be very proud of yourselves.

“And I think cave rescue now is emblazoned in neon signs.”

The team became trapped during a flash flood inside the Tham Luang cave on June 23, around 2.5miles from the cave entrance.

The British divers were part of an international effort which included US Air Force rescue specialists, Thai Navy SEALs and experts from Belgium, Australia and Scandinavia.

Cave diver Chris Jewell, 36, from Cheddar, Somerset said: “It was a very intense period. In the three days of the rescue operation of bringing the children out we just had to be focused on that mission.

“I was bringing the children out so I would dive with a child through the cave.

Ali Garman, 45, told William how he collected two specialist children’s mask – the only pair in the UK – from a diving shop in Cardiff and sped along the M4 motorway to Heathrow so they could be transported on a Thai Airways flight.

Mr Garman, a warden with South and Mid Wales Cave Rescue Team, said he had a police escort for part of the journey from a Wiltshire officer who asked what speed he felt comfortable driving at, and when he replied 90mph the officer said “we’ll do 100mph”.

The 45-year-old added he made the flight with 10 minutes to spare in his BMW 5 Series car: “He was clearing the road in front of me, I was hanging back what I thought was a safe distance and we were doing 105-110mph.”

William told some of the group about his caving experience with Mr Farr joking: “I still remember standing at the entrance thinking ‘there’s no way I can fit down that hole’ and he said ‘follow me’.”

The divers helped move the boys, who were equipped with full-face masks, through the flooded passages and the narrow sections of the cave network in the dark using guide ropes.
All the boys and the coach were brought to safety by July 10.

The reception is being held to recognise the “extraordinary contribution” the British team made to the rescue.

People took to Twitter to praise the heroes for their efforts.

One wrote: “These men are selfless heroes. They deserve recognition!”

While another said: “Thank you for your bravery to help those boys get out of that cave.”