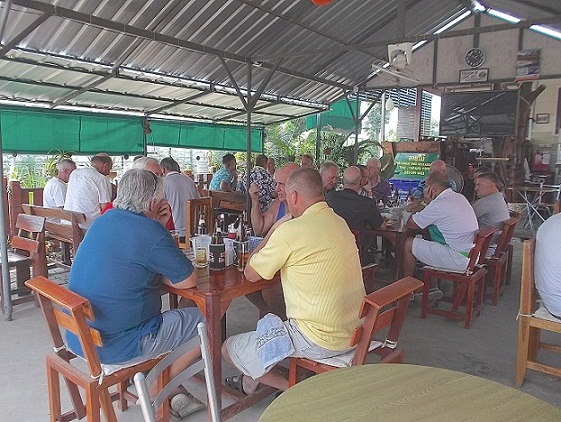 On the third ever occasion of the six month old and rapidly expanding Buriram Invitation Golf Challenge, record numbers of players participated in a one day Texas Scramble competition.

32 players took part. This was six up on the last outing which took place at Christmas time, and  eleven up on the first ever Buriram Golf Challenge which was sponsored by Buriram Times and happened in October of last year.

Numbers were so high that the last two groups had to play as four ball’s, while the other eight groups played in teams of three.

A couple of late withdrawals from the competition meant that some last minute shuffling to the team’s had to be done. Some players had also been turned away earlier.

Despite this, the competition all worked as planned and all players entered into the spirit of the game and seriously enjoyed their two rounds of golf in what became a day of searingly high temperatures and extremely strong sunshine.

Consequently quite a few shiny red faces could be spotted after the game at The Green Tree Pub where the awards ceremony and after match lunch were held.

On this third outing of the tournament’s history a new handicap system had been applied to help even out scoring between teams of differing abilities.

The tournament having initially been dominated by Americans the first two times, was on this occasion won by a team made up of two Englishmen and a Scotsman.

Playing a well worked eighteen holes to finish on a highly impressive score of 55 points, Colin Bradwell, Tony Murphy and Neil Cameron were the victorious side. 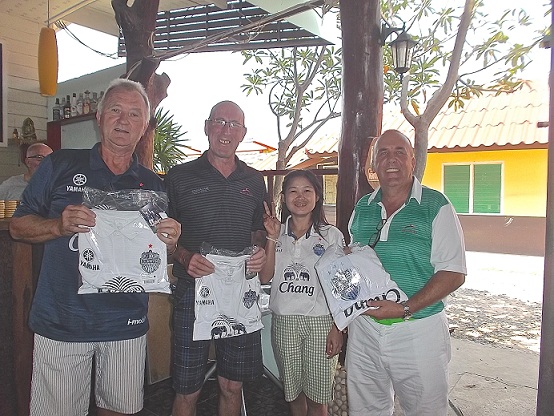 Colin Bradwell, a member of the winning team said ” We gelled really well out there. Between us there was always a good shot to play from. We even managed four birdies on our way round”

Such is the advantage of the Texas Scramble system that teams can pick the best ball at each stage and therefore help each other achieve the best score possible.

This, according to players, is one of the main reasons for The Buriram Invitation Golf Challenge becoming such a successfully attended tournament.

Other prizes awarded were for nearest the pin on the sixth hole and the longest drive on the third.

For nearest the pin, players were faced with the serious challenge of pitching over a large mound of volcanic rock from the tee and landing right onto a fairly small sized green. Not that easy.

A delighted Kjellis Eriksson from Sweden took home the closest to the pin prize with a shot that was a mere 1 meter and 47 centimetres from the hole. Very close indeed.

Kjellsis is not a regular golf player and so was quite rightly extra happy with his win.

Kjellis Eriksson With His Nearest The Pin Prize 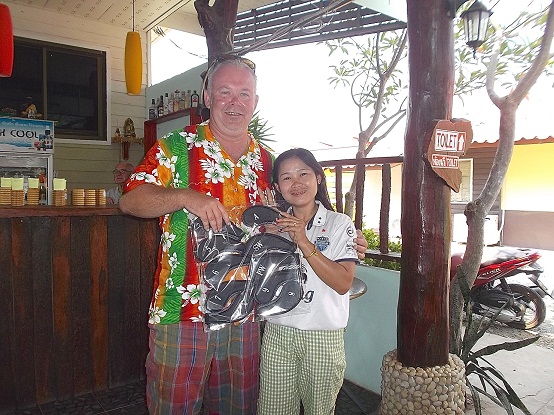 Lastly, a prize was awarded for the longest drive on the third hole. A monster drive of an estimated 300 yards deservedly took first place in this mini competition.

Other players on the same hole had hit what they thought must be prize winning shots only to have their expectations thoroughly dashed upon sighting the longest drive marker another fifty yards up the fairway from their own ball.

Ritchie Neville was the hitter of that gargantuan drive and so rightly earned his prize. 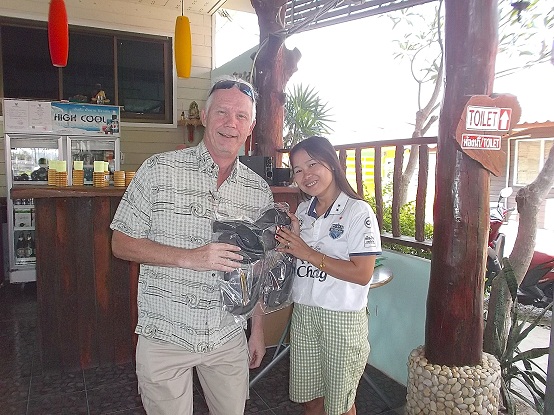 The day brought out some highly memorable moments of excellent golf, a couple of which should be given a mention too.

Firstly, the previously domineering American team showed why they had won the last two meetings (before handicaps) when they produced an eagle on the third hole. Certainly worth a mention.

Secondly, Jim Dornan should also be applauded for making a 60 foot putt on this way round the course. A great achievement. Well done Jim.

As mentioned before, after competition dinner and prize giving was held at the Green Tree pub. This proved to be an ideal venue where the resulting food and service was appreciated by all attendees.

Thank you from all the players to The Green Tree for a superb afternoon.

Crowds Assembled at The Green Tree 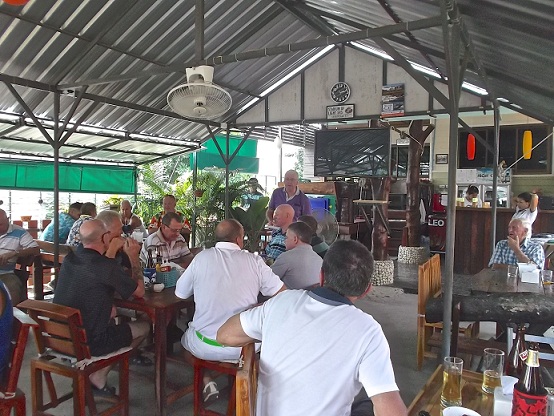 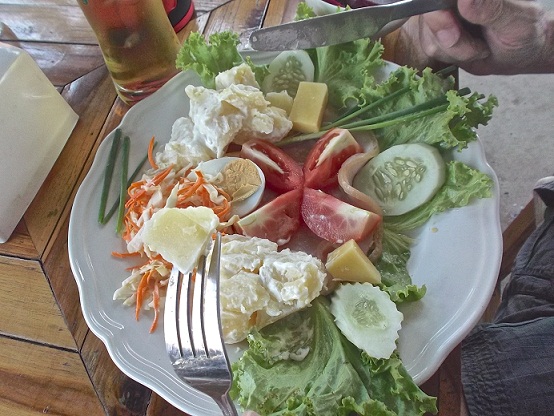 As we look to the future, rumor has it that the next Buriram Golf Invitation Challenge is to be held on the 4rth of July as a celebration of American Independence Day. Keep an eye out for further notice or an invitation into your mail box.