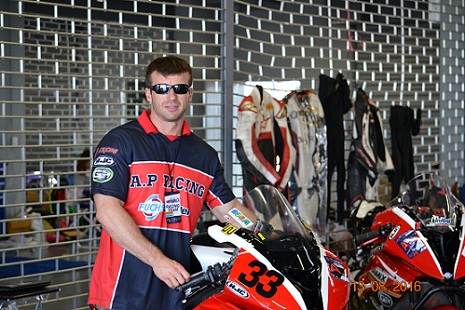 Buriram Times Moto-Sport reporters Colin and Steve were at the circuit on Saturday prior to the racing on Sunday to interview Canadian rider Colin Butler. Unfortunately Colin’s bike developed engine problems meaning he took no part in qualifying and the problem means he will not race on Sunday.

He races a BMW race machine in the ST1 class of the Asian Championships and is very much a privateer, funding his racing himself and doing his own maintenance on his bike.

He manages to do this at a high level but still has to carry out work in the oil and gas industry which is his main occupation.

He has lived at Ban Toei Kraton which is about one hour from Buriram for almost a year now so this is very much his home circuit but not one of his favourites.

He rode in Sepang, Malaysia last week, which is one of his favourite circuits, and was rewarded with a 1st & 2nd placing.

The Buriram Times will be publishing a more in depth story on Colin soon.

All About Chang Internation Circuit Miscellany