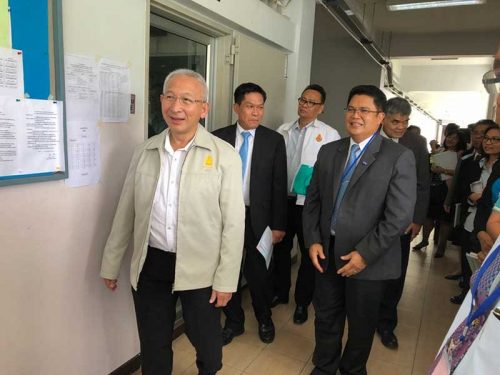 Thousands of people across Thailand took part in assistant teacher examinations on Saturday.

In Bangkok, public teacher exams were held at Triam Udom Suksa School in Pathum Wan district. There were more than 1,700 participants. According to Deputy Education Minister Udom Kachintorn who inspected the testing venue, the exams went smoothly with no reports of cheating.

Interviews will be conducted on September 1st and results will be announced September 6th. Those who pass will start working at public schools in October.

This year, there were 6,000 positions available, said the deputy minister, adding that more than 180,000 people took the exam.

Meanwhile, in Yala province, the teacher exams took place at Khanaradsadonbamrung School and two other schools. Nearly 4,000 people took the test on Saturday amid tight security. The proctors were public school teachers and members of the provincial board of education.

In Nakhon Si Thammarat, the exams took place at four different locations, with more than 1,800 applicants, while only 116 positions are available.

Times comment:- Good to hear there was no cheating ! Many people have stated that they hope the “envelopes” remained out of sight !