Thai Sergeant-Major Sentenced To Life For Hit On Referee 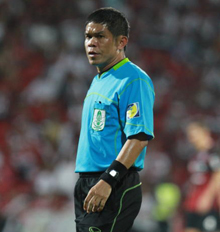 An Army sergeant-major has been sentenced to life imprisonment for ordering a hit on a Thai Premier League referee in 2013.

Sergeant-major Sirisak Chanruang ,56 ,was found guilty at the Appeals Court after he was acquited by the Primary Court in August 2015 due to insufficient evidence.

Sergeant Thanom Borikut was gunned down in the Sports Authority of Thailand car park in Bangkok’s Bang Kapi district on September 4, 2013.

He was seriously wounded but survived his injuries.

Sirisak and two others were charged with hiring getaway motorcyclist Kosin Singuan and gunman Sukhum Dangkulwanich for 100,000 bht to shoot Thanom.

The shooter is still at large and Kosin subsequently died in June, aged 22 but not before he confessed to his part in the shooting.

He directly implicated Sirisak as being the person who hired Sukhum and himself. His evidence  could only have been provided by someone who was actually at the scene of the attempted murder.

Sirisak’s involvement appeared to be confirmed through mobile phone conversations and records which left the court in no doubt regarding who had arranged the hit.

Sirisak has been a controversial figure throughout his refereeing career and Kosin indicated that the shooting appeared to be football related.

Sirisak and his family were at the Appeal Court and they intend to lodge an appeal against the court’s findings.