My wife’s friend’s mother was weeding her garden and was bitten on the finger by a venomous snake.

She didn’t see the snake, but it must have been a cobra, krait or maybe a viper.She drove herself to hospital on her motorbike and is lucky to be alive. However, she is not out of the woods yet. The surgery looks a bit invasive for a snake bite and they are leaving the wounds open for now.

Infection could be an issue. 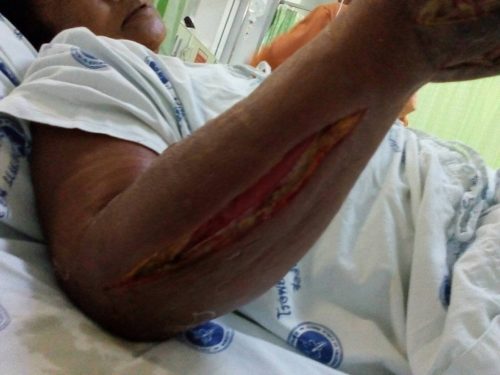 What you are seeing is called a fasciotomy, it is used to relieve pressure that is causing vascular restriction to the degree that it is putting a limb at risk of being lost. It is very much a last resort to save a limb from amputation. However, this procedure is not normally recommended for snake bites as studies have suggested that it may worsen necrosis. Presumably they have been trying anti-venom and this has been unsuccessful and have resorted to this in attempt to save the lady’s arm.

The fact the species of snake is unknown has made the situation more dangerous as the correct antivenom needs to administered. Also, the venom of different species acts in different ways.

Let’s Take Pigeon Control Seriously And Do So Immediately