This week’s round up of Thailand news is posted on Saturday and is a regular feature. 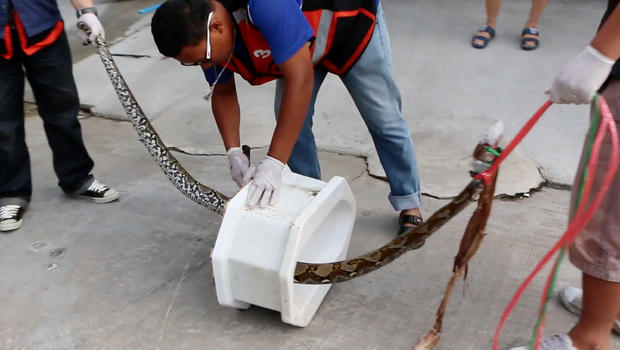 The most head turning headline of the week must be “Python Bites Thai Man’s Penis In Terrifying Toilet Encounter.” The man lost a lot of blood but is now recovering at Chularat Hospital, according to hospital officials. Although horrifying especially as this happened in the man’s home, you have to admire the use of alliteration in the headline. CBS went for “Man Healing Happily After Prying Penis From Python’s Jaws.”

Emergency workers had to dismantle the toilet to remove the snake, which also survived the ordeal.

CNN has full report with video of the offending snake. Of course the python is not as dangerous as the Monocled Cobra we reported on last year. REMEMBER THESE ATTACKS ARE RARE, DON’T HAVE NIGHTMARES – or put off visits to the toilet.

Tragic news from Koh Samui that a British woman was killed when a speedboat full of tourists capsized in Koh Samui. Monica O’Connor,28, from Manchester was on honeymoon following her dream wedding. After being hit by a ‘big wave’ tourists were trapped under the boat. A German woman Kafo Franeiska, 29, has also been confirmed dead by Thai authorities. Another Britain Jason Parnell, 46 is still missing. His wife, Puja managed to escape but Mr Parnell was trapped.

In continuing conservation news – Thailand has shut down ten popular diving sites in a bid to slow a coral bleaching crisis. Let’s hope the national parks agencies continue to try to protect Thailand’s fantastic natural environment. Coral reefs around the world are under threat due to global warming.

In Economic News, the Bangkok Post reports : “The economy is strong enough to withstand the impact from continuous volatility in the global financial and capital markets because of the country’s limited exposure to foreign-denominated debt.” While the nation states that ‘Thailand remains attractive to German investors.”

The investment and tourist boom in Buriram reported on by the National Broadcasting Services of Thailand last week boasted some impressive figures – Service sector up 400%, Airport sector up 1800%. Hotel Rooms are in high demand despite an increase from 2000 to 5000 available rooms in Central Buriram. Buriram’s Chamber of Commerce is welcoming new investment and it sounds like a great opportunity to get in at the start of something as land prices are set to rise.

Have a great weekend.