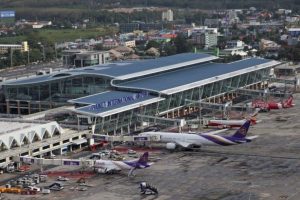 Thai authorities are carefully screening pork products being carried in by travellers from China and Mongolia after the World Organisation for Animal Health warned last week of outbreaks of African swine fever in those countries.

Sorawit Thanito, director general of the Livestock Development Department, said on Tuesday that officials at Phuket International Airport’s Animal Quarantine Station had on January 18 seized from a Chinese tourist pork sausage and salami found to be virus-contaminated.

The department met with representatives of the Association of Thai Travel Agents and Thai-Chinese Tourism Alliance on January 15 and asked them to inform Chinese tourists about the prohibition on bringing in pork products without a permit.