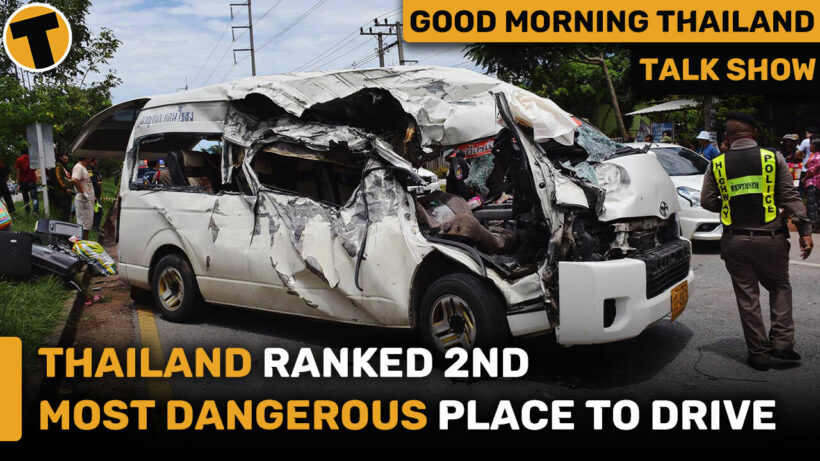 The Zutobi, which is a driver’s education portal website that publishes a new score annually, has reported that Thailand scored badly on five different factors to rank it on second on the list of most dangerous nations to drive in.

Switzerland rose into the top ten countries with the safest roads, up three places from last year.

The full report and complete country rankings can be seen at https://zutobi.com/static/assets/the-worlds-safest-roads/common/safest-roads-zutobi-2021.pdf

What can be done to avoid road accidents and unnecessary road fatalities?

Zutobi says that first of all drivers should be aware of the main reasons accidents occur – by narrowing the list down to the major reasons, drivers can also focus specifically on not making those mistakes.

Major reasons include speeding, distracted driving, driving under the influence of alcohol, and lack of scanning, among other things. Government awareness campaigns can also help educate drivers to avoid these behaviors.

Second, drivers also need to have proper knowledge of driving safety practices and the rules of the road before beginning to drive. A good way of attaining a proper foundation is by reading driving theory and doing practice tests.

Thailand saw a total of 32,190 road accidents in 2020 and 2021, mostly involving pickups, according to the Transport Ministry.

According to the Ministry of Transport’s Data Catalogue, motorcycles did not cause the most accidents as many assumed, however the Ministry information does not relate to injuries or fatalities.

Most accidents that happened in 2020 and 2021 involved pickup trucks (37 per cent), followed by a category of private and public vehicles (27 per cent).

Key interesting statistics from the ministry’s Data Catalogue include:

Types of vehicles in accidents:

Types of roads where most accidents happened:

– Overturning on or skidding off straight-ahead roads (43%)

– Overturning or skidding off curved roads (13%)

– Being cut in front by pedestrians, vehicles or animals (8%)

– Violations of traffic lights or signs or vehicles malfunctioning (2%)

– Unlawfully overtaking other vehicles, not allowing vehicles on main road to pass first, or not familiar with roads (1%).