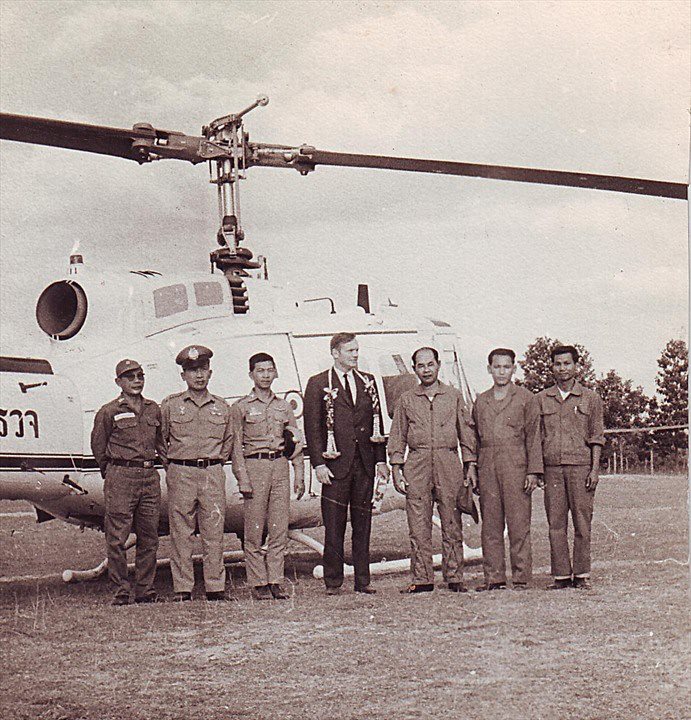 I had heard before a little about the man who is reputed to have been in Buriram for some forty five years. Obviously possessing a rich tapestry of both experience and knowledge of Thailand, Karl Kunz was an intriguing possible interview.

He is a man you may well have seen whizzing past you on a bicycle. Perhaps you’ve spotted him jogging along the road. At 68 years old Karl is still fit as a veritable fiddle.

A regular competitive long distance runner and gym goer, the American could put most people thirty years his junior to pitiful shame.

After a few initial e-mails back and forward Karl agrees to meet me. It was already apparent from our internet discussions that the man with three university degrees and four and half decades in Thailand was going to be packed with interesting information.

I draw up at his house and struggle to find the front door. He doesn’t have one it turns out. So he shows me round the back. We enter a spacious living area laid with a dark wooden parquet floor.

Already having exchanged some information via cyberspace we were now finally face to face.

Rob: So Karl, It’s great to finally meet you, I know you’ve already answered many questions by e-mail but let’s just go over a few more things today.

Karl: Hi Rob, glad to meet you too. I hadn’t heard about the Buriram Times until now. So I’ve had a look at your site and I like it. I like your work also. Yes please go ahead.

Rob:Thanks, Karl, much appreciated.  Ok so let’s start at the beginning again. When did you first come to Thailand and why?

Karl: Well, I came to Buriram in 1969 as a Peace Corps Volunteer.  I was an agricultural extension agent for chicken and pig production at village level. 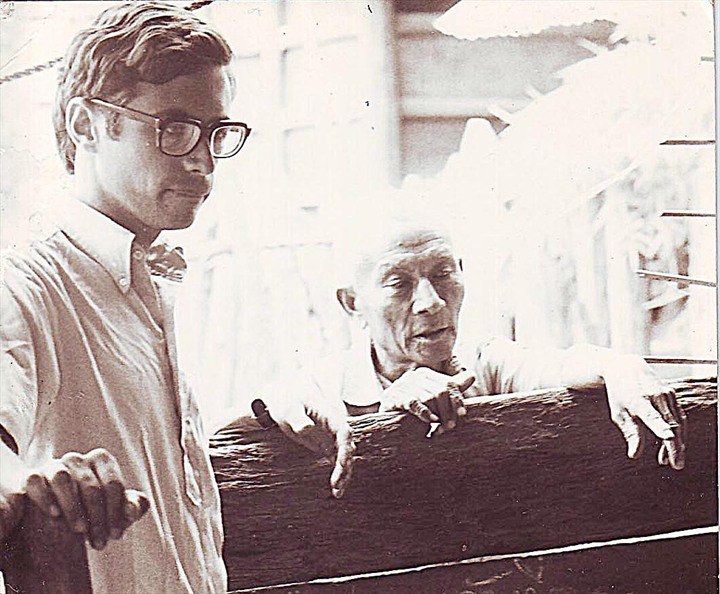 Rob:Ah Ok how did you get into that?

Karl: I went to train in the Peace Corps in Hawaii. I was offered three possible assignments. Teaching English in either the Philippines or Fiji were the first two options. The third was coming to Thailand and helping improve their chicken and pig farming methods.

I chose number three. I didn’t want to be stuck in a classroom. It sounded far more interesting, to me, helping with village life here in Thailand.

Rob: Interesting. And you came straight to Buriram?

Karl: Yes in 1969, just before Neil Armstrong landed on the moon. Four months later when Neil Armstrong visited Buriram to visit a Peace Corps village project, I acted as his interpreter.

Rob: Wow, I never knew Neil Armstrong came to sleepy Buriram. And you were his interpreter. Fantastic stuff. 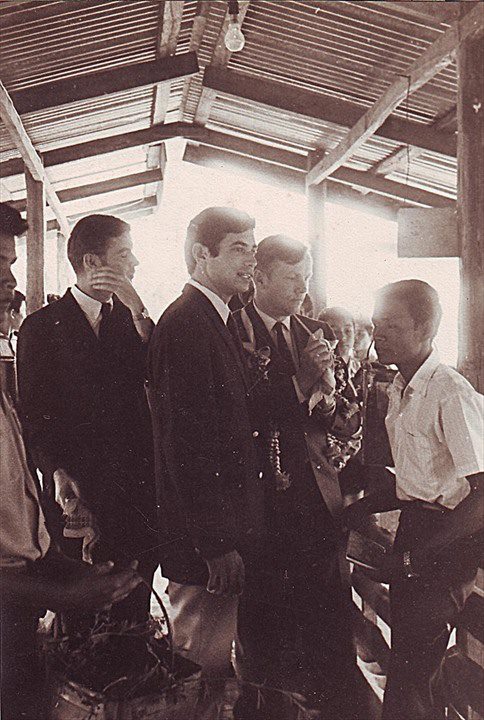 Rob: How long were you a Peace Corps volunteer and what did you do?

Karl: I was a Peace Corps volunteer for 2 years. I Introduced non-native chicken breeds and production methods and introduced Khao Man Kai to the restaurants.

We also built 13 elementary schools with village labor and money donated by US high school students. 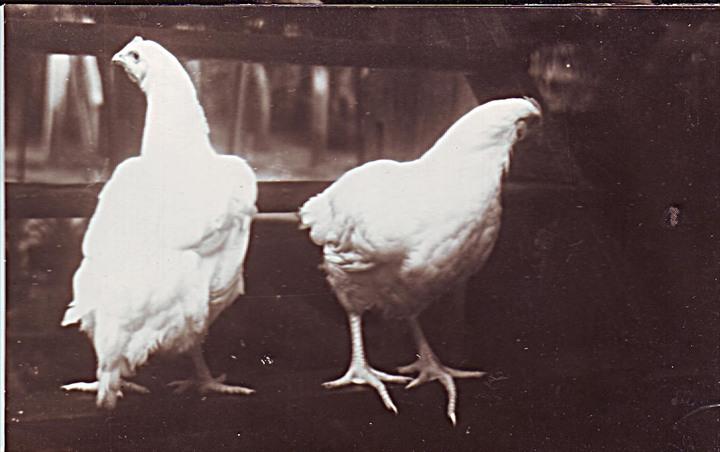 Rob: That’s great Karl. What did your family think about you coming to Thailand way back then?

Karl: They were cool with it.

Rob: And after the two years Peace Corps – What have you been doing in Buriram for 45 years?

I Married a local girl (Khun Noi) in 1972 and worked in almost every region of Thailand doing village agricultural extension work: field and vegetable crops, animal husbandry and aquaculture.

I have also been back and forward to the States a lot so not all of my time has been in Thailand.

Noi And Karl In 1972 on Their Wedding Day 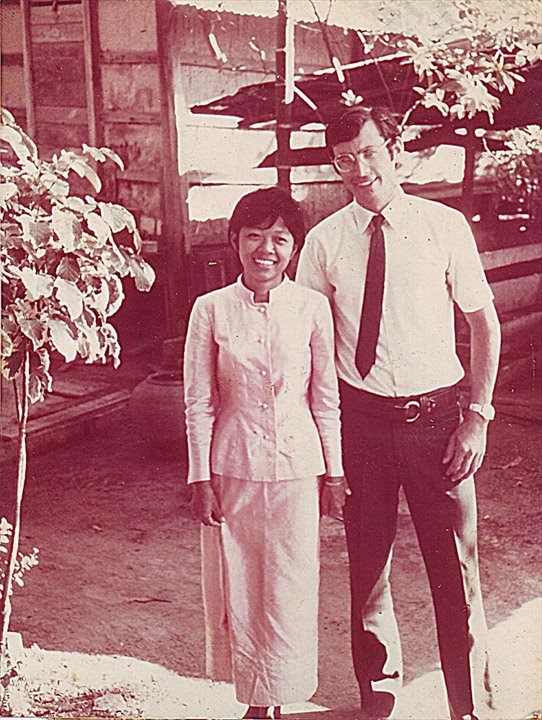 Rob: I’m impressed with all your good work. What was Buriram like when you first got here?

Karl: Very friendly people, of course. People in rural areas were especially friendly – always inviting me to stay over at their houses. Rajabhat Buriram University was just a grass field used for helicopter landings by the nearby Salaklang.

No cars except for clunky Land Rovers driven by government officials. No paved roads at all except for some cement strips downtown. Flooding of roads and villages was common in the rainy season, even in town. 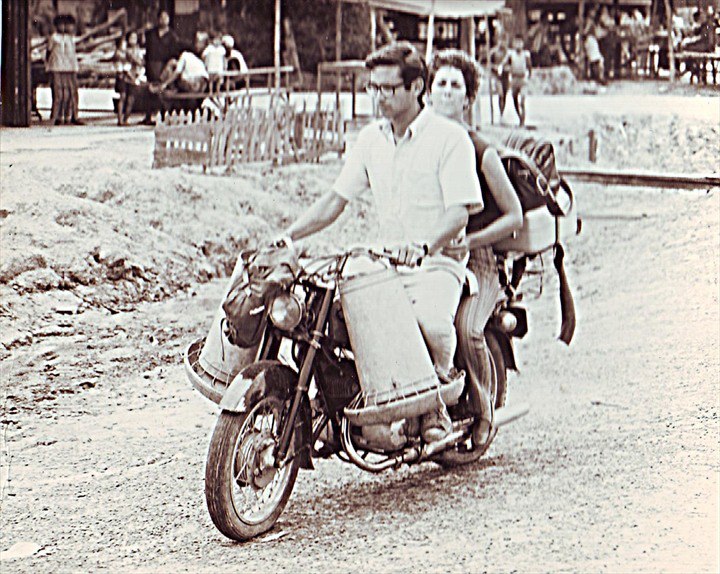 No one spoke English, no western music, no other foreigners, coconut husk used for toilet paper in many places, buffaloes under the houses, huge movie billboard paintings, all young girls chaperoned on dates, noodles only 2 baht a dish, communist insurgents trained in China caused much violence throughout the NE including border areas of Buriram, frequent military coups.

Little or no budget for education or building schools – many schools were part of village temple compounds and many had no walls, mud floors. In the border areas there was a lot of jungle and many huge trees.

Typical House Back Then. Many Still Exist Today 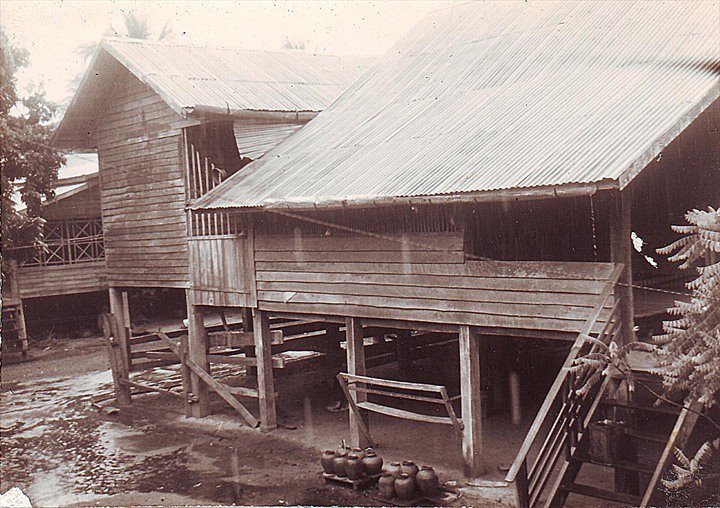 There was no middle class, even in Bangkok. Government employment was highly coveted since it involved the astonishing security of a monthly salary. No one had studied abroad.

I felt then like I had arrived from 50 years in the future. It is now almost 50 years later and I watched Buriram catch up alright.

But “being from the future” I saw Thailand as a land of many opportunities and I pursued many of them, in both agriculture and computers.

Rob: What are the main changes you have seen?

Personal income and cultural modernity are huge changes, unbelievable really from the viewpoint of 1969 Buriram, but change has been very gradual, almost unnoticeable, until recently.

Buriram town was seldom visited by tourists domestic or foreign. In 1997 when the economy crashed most vehicles disappeared from the roads (repossessed) and once again the slow tempo of life seemed quite normal.

In the last decade, however, much better roads, some big box stores and lately many new hotels and of course the Buriram United football team phenomenon. The commercial center of town has now shifted outward.

The town’s electricity used to be produced in town by a huge generator near Saphan Yao and blackouts were common. The generator was replaced by electricity supplied from networks outside the province but blackouts seem as common as before.

Rob: You’ve seen it all it I’m sure. What interests you most about Thailand and Thai culture?

Karl: The older I get the less I appreciate cold weather and the more I like Thailand’s subtropical heat. I like to exercise every day and if I don’t sweat while exercising the toxins are not being cleaned out!

I like to run and there are many road races to choose from every single weekend – I travel all over Thailand with my wife to run these races and thanks to runner camaraderie have many friends of all ages all over the country.

I was lucky to discover a group of forest monks who are old school and actually teaching Buddha’s meditation methods without much talk or fanfare.

These monks are the real deal and my wife and I have done many silent vipassana retreats together in the forest.

Rob: I wouldn’t mind trying that  meditation retreat myself. What do you see as the main differences between here and the west?

Karl: The runners in the US and in Thailand are the same – very quick to be good friends, and very passionate about the sport.

Education is a big difference. Students here are often very bright but unfortunately the education system does not teach students to use their own heads to solve problems.

Critical thinking, being able to do your own research, thoroughly mastering a subject, love of reading, expressing yourself clearly – these are the results of a good education, in my opinion.

This makes for world-class diplomats but also hard truths may be left hidden until they explode.

In the west, on the other hand, it’s not uncommon to see a lot of shouting going on between children and parents, between siblings, between anyone discussing anything for that matter! 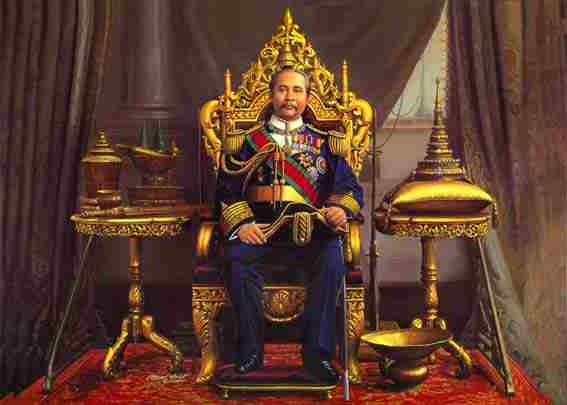 Rob: I do agree, as you know I also teach here and it would be nice to see the students encouraged to think a bit more for themselves. What do you think that we can learn from Thai’s and Thai’s from us?

Karl: Diplomacy, Jai yen, and from forest monks we can learn the ancient science of subjectivity. From us, perhaps this: encourage children to ask questions and then more questions and have enthusiasm for lifelong learning.

Rob: That makes great sense. You said before you married. How did you meet your wife Noi?

Karl: When I first came to Buriram I was 23 and looking for an empty pig sty to use as a demonstration of modern husbandry methods. There were pig stys behind or under many houses in Buriram but none were empty.

Noi had the only empty pig sty I could find. She helped me raise pigs, then chickens, then after we married in 1972, two children. The oldest, daughter Marissa, teaches art in San Francisco.

My Son Dan does computer visual effects for Hollywood blockbusters and has projects all over the world. They visit Buriram every year and absolutely love the slow tempo here.

In 1992 Noi and I built our house on her land, the same location as our pig sty. 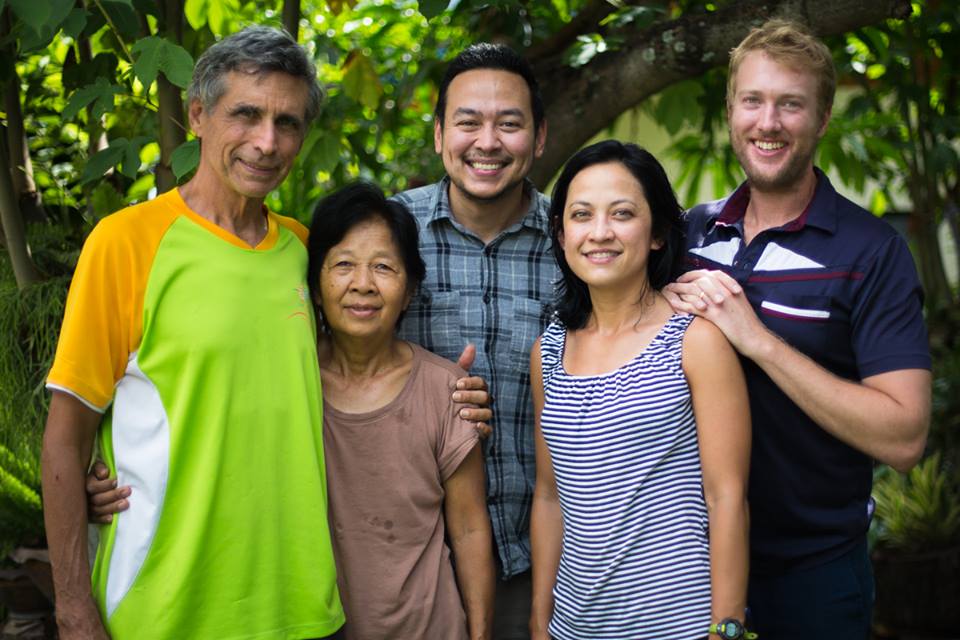 Rob: You must be very proud. That’s superb. Were your kids educated here?

Karl: Partially yes. They were in an international school for a few years.  But before they finished their high school I took them back to Hawaii for their last couple of years and then for their college education.

Rob: Do you ever go home again?

Karl: I used to visit my mother every 1-2 years but she passed away a few years ago and I haven’t visited the US since then.

Rob: Sorry to hear that, but you said your kids come and visit Buriram every year so that’s nice.

Karl: Yes every year which is nice.

Rob: Very nice Karl. I hear you are a very keen sportsman. What keeps you motivated to keep getting out there?

Karl: Regular exercise and competing is a lifestyle. I do it instead of watching TV or whatever. When I try to stop my body protests and feels lousy, it won’t let me stop.

Rob: How long have you been competing?

Karl: I was a runner in high school and college, but only got serious around age 45. Basketball had been my passion but I realized most basketball players in their 40s had bad knees so I changed to only running.

Karl and Noi at a Track Meet 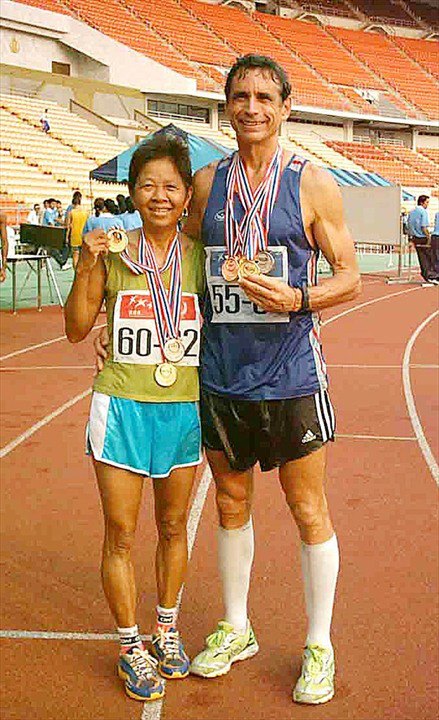 Rob: All very inspiring stuff Karl. It’s been great to meet you and hear some of your story. Also very interesting to get your perspective on the changing landscape of Buriram.

Karl: My pleasure Rob. Anytime and perhaps we can meet again soon.

I head off back to my desk and computer rather amazed by the man I just met. What I haven’t covered in the above dialogue is that Karl as well as helping so much with the agriculture of Thailand went on to do a degree in computer science.

He was awarded his first degree in philosophy before even coming to Thailand. After his experiences in the Peace Corps, Karl gained a scholarship to an Agriculture degree.

Later, the ever growing individual, came across computers for processing the data of his agricultural work.  He was privy to use one of the first computers in Thailand with an Intel processor in the late 1970s’.

Certainly a man who knows how to rise to a challenge and a bit of a Buriram legend.

Karl In His Garden Today 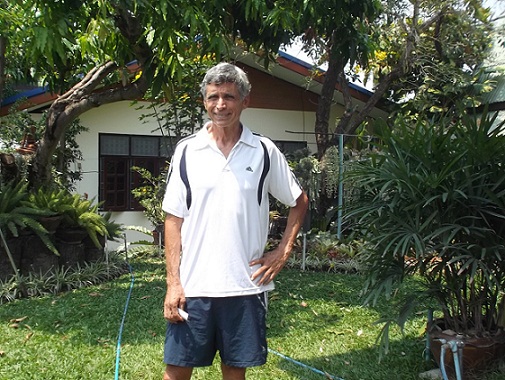 Why So Many Thais Have Chinese Ancestry